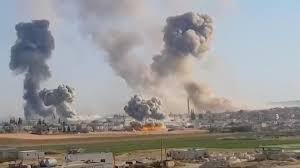 Plumes of smoke rise from a location, said to be Khan al Subul, Idlib province, Syria, targeted in a strike in this still image taken from a video uploaded on May 28, 2019. White Helmets via REUTERS

BRUSSELS (Reuters) – The European Union called on Wednesday for a ceasefire in Syria’s Idlib province and said Russia, Turkey, Iran and the Syrian government must protect civilians under siege.

At least 180,000 people have fled an surge in violence in the province in northwest Syria, the last major stronghold of rebels who have fought against President Bashar al-Assad’s government since 2011. Government bombing has killed dozens in the past three weeks.

The Syrian government says it is responding to attacks by al Qaeda-linked militants.

“We expect the Syrian regime and the Astana guarantors to fulfill immediately their responsibilities and commitments, and ensure the immediate protection of civilians,” the EU’s top diplomat Federica Mogherini and its humanitarian aid chief Christos Stylianides said a statement, referring to Russia, Turkey and Iran’s peace efforts.

“Indiscriminate attacks on women and children and other civilians, their displacement, and the destruction of civilian infrastructure cannot be justified under any circumstances.”

The region, home to an estimated 3 million people, including many who fled other parts of Syria as government forces advanced in recent years, has been partly shielded by a truce agreement since last year, brokered by Russia and Turkey. Much of the recent fighting has hit a buffer zone agreed under that deal.