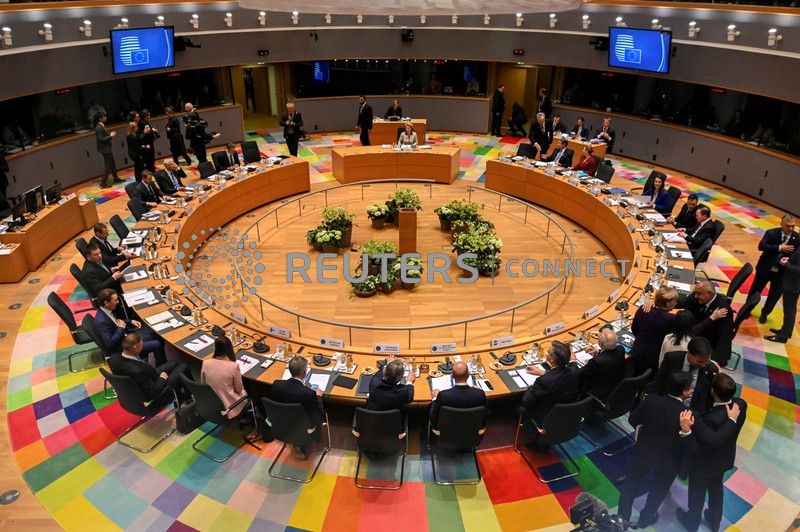 FILE PHOTO: European Union leaders meet during a round table at an EU summit in Brussels, Belgium February 20, 2020. Riccardo Pareggiani/Pool via REUTERS/File Photo

BRUSSELS (Reuters) – European Union leaders appeared no closer to reaching a deal on the bloc’s next joint budget on Friday, with deep divisions between richer and poorer nations over its size – and what to spend it on – unresolved after all-night talks.

Some want extra funding to match new ambitions to fight climate change and manage migration, some want a continued focus on development and farm aid, and some are pushing for greater realism in recognising the 75 billion euro ($81 billion) fiscal hole left by net contributor Britain’s EU exit.

“It is important to finally have a figure that is supposed to be distributed,” a frustrated Andrej Babis, the Czech prime minister, told reporters on leaving EU headquarters in Brussels the middle of the night.

Dubbed the Frugal Four, the bloc’s wealthy net contributors – Austria, the Netherlands, Denmark and Sweden – want to put the budget ceiling at 1% of GDP and refuse to pay more to make up for the loss of Britain’s payments.

Their less developed peers are the main beneficiaries of EU funds and want to keep generous aid coming regardless.

“If that won’t be clear (on Friday) … and those states (the Frugal Four) will keep insisting, I think there’s no point continuing the summit,” Babis said, summing up the lack of progress.

After an initial session of all 27 leaders on Thursday afternoon, their chairman – former Belgian Prime Minister Charles Michel – broke for separate face-to-face meetings with each leader.

These went through the night and until 0600 GMT on Friday, with Michel asking that leaders name their top priorities rather than a long list of demands, as well as any sweeteners that could help them sell a deal at home, diplomats said.

“The bilaterals took forever. But it seems things have not moved, the frugals keep on insisting on their position,” one diplomat said on Friday morning.

An EU official confirmed: “The position of the frugals has not changed an inch… so there is not much to go on.”

Leaders are expected to resume their session at 1000 GMT.

But they have until the end of the year to agree so chances of an early compromise appear low.

Beyond the overall size of the budget, the other point of contention is what to spend it on. The poorer eastern and southern nations want to hold on to development aid and are backed by France, Ireland and others in seeking to uphold major farm subsidies.

But Germany, the Netherlands and others are keen to shift funds towards new priorities including global warming, migration and growth in the digital economy.

The two are also leading a small group keen to preserve rebates that reduce their payments to the current 2014-20 budget. Every other EU country is against that.

Poland and Hungary – where nationalist and eurosceptic governments stand accused of flouting democratic standards – refuse to back making EU aid conditional on upholding the rule of law.