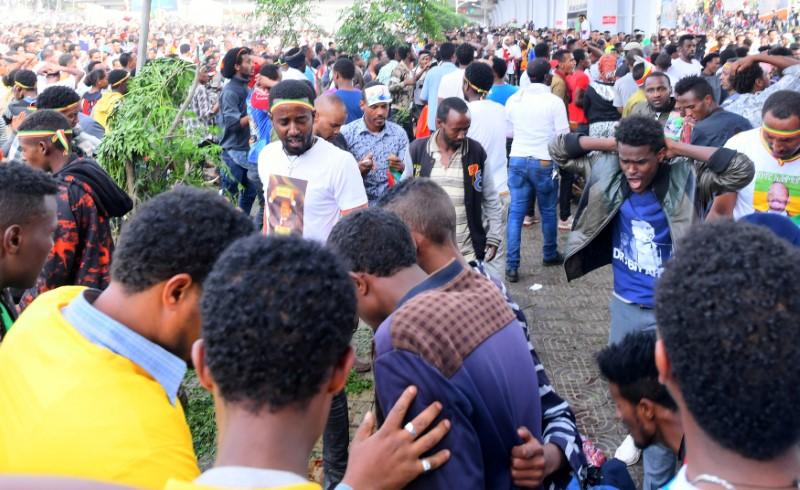 Ethiopians react after an explosion during a rally in support of the new Prime Minister Abiy Ahmed in Addis Ababa, Ethiopia June 23, 2018. REUTERS/Stringer

ADDIS ABABA – Ethiopian Prime Minister Abiy Ahmed survived a grenade attack on Saturday at a massive rally in support of his push for radical political and economic reforms, including a peace deal with regional arch-enemy Eritrea.

Abiy, whose first three months in office have pointed to the nation of 100 million opening up to the outside world after decades of inward-looking, security-obsessed isolation, was whisked away by bodyguards moments after the blast.

The former soldier said the attack, which killed one and wounded scores, was an attempt to divide the nation.

Police said six suspects had been detained, without giving details, while state media said nine police officials, including the deputy commissioner of the Addis Ababa Police Commission, were being held over security failings.

Abiy took office in April, pledging to bring more transparency to government and reconciliation to a country that has been torn by protests since 2015.

Despite boasting one of Africa’s fastest growing economies, opponents say the benefits have not been shared fairly between ethnic groups and regions in the country, which has been run by the same ruling coalition for more than quarter of a century.

As well as promising economic reforms, Abiy stunned Ethiopians this month by saying he was ready to fully implement a peace deal with Eritrea that was signed in 2000 after a two-year war. For years, Ethiopia refused to implement the deal, saying it wanted more talks.

Addressing the nation on television shortly after the blast and still wearing a green t-shirt he was handed at the rally, Abiy said the attack was an “attempt by forces who do not want to see Ethiopia united.”

The attack took place moments after Abiy had finished his speech to tens of thousands of people gathered in Meskel Square in the center of the capital Addis Ababa.

A witness told Reuters an assailant with a grenade had been wrestled to the ground by police before it exploded. Another saw Abiy whisked away by guards.

Health Minister Amir Aman said on Twitter that as of 9pm local time, one person had been killed and 156 wounded, with eight of them in critical condition.

State-owned Ethiopian Broadcasting Corporation said Abiy and his deputy Demeke Mekonnen visited Black Lion hospital, where 86 of the victims were being treated.

Eritrea, which seceded from Ethiopia in 1991 after a long war of independence, condemned the incident, as did the European Union and the United States.

Under the 2000 peace deal, Ethiopia is required to cede the border town of Badme to Eritrea. But war veterans in Badme oppose the peace initiative, with some residents saying they will not leave the town.

Ethiopia’s ruling EPRDF is made up of parties representing the country’s four major ethnic groups. Abiy hails from the Oromo ethnic group, making up roughly a third of the population.

Oromos, along with the Amhara ethnic group, led street demonstrations against the government from 2015 that began as protests against a development plan around the capital and which opponents said the state was using to grab land. Protests broadened to cover other political and economic demands.

Abiy took office after his predecessor, Hailemariam Desalegn, resigned in February amid the protests.

In another of Abiy’s major policy shifts, the prime minister has said Ethiopia will open its state-run telecoms monopoly and state-owned Ethiopian Airlines [ETHA.UL] to private domestic and foreign investment, loosening the government’s grip.