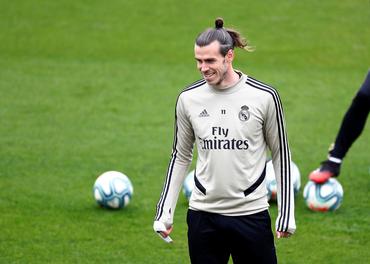 (Reuters) – Paulo Dybala left Gareth Bale out of his Real Madrid starting line-up but had no trouble beating the Welshman’s Manchester City side in a FIFA 20 video game as part of a Combat Corona fundraiser for UNICEF at the weekend.

Juventus striker Dybala only recently recovered from the coronavirus himself but was in good spirits and proved too good for the Real winger at the console on Sunday.

“I think it’s a quick retirement back out of FIFA for me to be honest … all it takes is one moment and my defence wasn’t good enough,” Bale, who is the co-owner of esports organisation Ellevens Esports, said.

With the coronavirus pandemic bringing soccer across the globe to a standstill, the world of esports has helped keep players and fans entertained.

“It’s just about people staying home and finding things to do… obviously everybody is going to find it difficult at different points (to self isolate) but if we can stay in and keep everyone safe, it’ll save lives,” Bale added.

“Everyone try your best to stay at home and keep yourself entertained.”

Other top players such as Luke Shaw, Dominic Calvert-Lewin, Jordan Pickford and Ruben Loftus-Cheek were also part of the event, which was broadcast live on Twitch and raised around 17,000 pounds ($20,791) through online donations.

Dybala, who won the game with a quick-fire brace from the Karim Benzema avatar and another goal from the virtual Eden Hazard, said the rematch would be in video game version of another sport close to Bale’s heart.