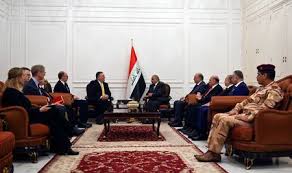 BAGHDAD/CAIRO (Reuters) – The U.S. troop withdrawal from Syria will not be scuppered despite Turkish threats against Washington’s Kurdish allies there, Secretary of State Mike Pompeo said on Wednesday, promising to ensure that the Kurds would still be protected.

Pompeo has the task of explaining U.S. policy in the region after Trump’s announcement of the withdrawal of all 2,000 U.S. troops from Syria, which rattled allies and came as a shock to top U.S. officials. Defense Secretary Jim Mattis quit over it.

The U.S. forces have been working with a Kurdish militia to fight against Islamic State. The Kurds control a swath of northeastern Syria, Washington’s foothold in a conflict that has drawn in Russia, Iran, Turkey and other regional powers.

Washington has repeatedly said its Kurdish allies will remain safe despite the withdrawal. But Turkey, which considers the U.S.-backed Syrian Kurdish YPG militia an enemy, has repeatedly vowed to crush the group and repudiated any suggestion of protecting it once U.S. troops leave.

Turkish President Tayyip Erdogan denounced visiting U.S. National Security Adviser John Bolton on Tuesday for suggesting that protecting the Kurds would be a pre-condition of the U.S. withdrawal, a suggestion Erdogan called “a serious mistake”.

Asked in Erbil if Erdogan’s pushback on the protection of the Kurds puts the withdrawal at risk, Pompeo told reporters: “No. We’re having conversations with them even as we speak about how we will effectuate this in a way that protects our forces…

“It’s important that we do everything we can to make sure that those folks that fought with us are protected and Erdogan has made commitments, he understands that,” Pompeo added.

The withdrawal of U.S. forces in Syria strengthens the hand both of Turkey and of the Syrian government of President Bashar al-Assad, which is backed by Russia and Iran. Pompeo has stressed throughout his trip to the region that Washington still aims to counter Iranian influence.

In Iraq, Pompeo also sought to smooth over relations after political leaders were angered when Trump visited U.S. troops on the day after Christmas at a remote desert air base without stopping in Baghdad or meeting any Iraqi officials.

Many politicians from the ruling coalition of mainly Shi’ite parties called Trump’s visit a violation of Iraqi sovereignty and demanded the United States withdraw troops.

President Salih, answering a reporter’s question on whether he wants the United States to keep troops, said Iraq “will need the support of the U.S.” and expressed his “gratitude to the U.S. for support over the years”.

“ISIS is defeated militarily but the mission is not accomplished,” Salih said, using an acronym for Islamic State.

The United States withdrew its troops from Iraq in 2011 eight years after an invasion to topple Saddam Hussein, but sent thousands back after Islamic State fighters swept into the north of the country in 2014. It now has around 5,200 there, and Trump has not announced plans to pull them out.

Islamic State militants are still waging insurgent attacks in the north of the country and trying to make a comeback, although they were driven from all towns and cities last year.

Asked on Tuesday about what would be discussed during a possible meeting with Pompeo, Abdul Mahdi said deepening Iraq’s relationship with the U.S.-led coalition fighting Islamic State.

“He’s an ally, he represents a friendly country,” Abdul Mahdi said of Pompeo on Tuesday. “We will raise those issues, and how to deal with regional issues altogether and deepen our economic and educational relations with the United States.”