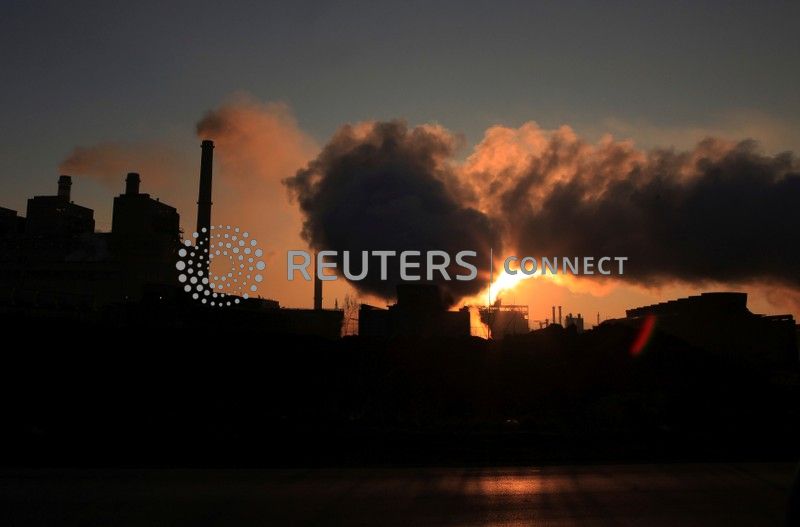 FILE PHOTO: Smoke billows out of the towers of the coal-powered Kosovo Power Plant A in Obilic, near Pristina December 5, 2013. REUTERS/Hazir Reka

PRISTINA (Reuters) – Environmentalist groups on Monday filed a complaint with the European Union’s energy watchdog challenging the legality of a power purchase agreement for a planned $1.3 billion coal-fired power plant in Kosovo.

Kosovo and London-listed power firm ContourGlobal picked on May 3 a consortium of General Electric subsidiaries to build the 500-megawatt plant, which is designed to meet nearly half of Kosovo’s power demand.

The Kosovar government has committed to buying the total output of the plant and the 20-year power purchase contract awaits ratification by the Balkan republic’s parliament.

But environmental activists fear the deal would strain the state budget and lead to higher costs for consumers.

In the complaint to the Vienna-based Energy Community body, five local and international environmental groups said the deal does not comply with the body’s rules on state aid “because it provides ContourGlobal a range of benefits that give it an unfair advantage over other energy producers”.

Kosovo’s Economy Minister said the contract was made in compliance with the Energy Community’s requirements and local laws. “In our view it is a well-argued issue (based) on entirely legal grounds,” Valdrin Lluka told Reuters.

The groups also said it guaranteed that a state-owned company would buy all the electricity generated by ContourGlobal at a target price of 80 euros ($90) per megawatt hour (MWh) – much higher than current electricity prices in the region.

The state would also guarantee an “availability payment” to the company even when the power is not needed, as well as pay ContourGlobal’s network fees, reimburse it for a take-or-pay agreement that it signed with the state-owned lignite mine and provide the land for the plant “for a token fee of 10 euros”.

“To say the Kosovar government has made a terrible mistake would be an understatement”, said Pippa Gallop of CEE Bankwatch Network, one of the five groups that filed the complaint.

“Whatever caused them to sign this absurd contract, it is up to Kosovo parliamentarians, the Kosovar public and international bodies like the Energy Community and European Commission to make sure it doesn’t get ratified, for the sake of Kosovo’s consumers and taxpayers,” she added.

Construction of the plant is expected to start this year. Currently around 90 percent of Kosovo’s electricity is produced by two ailing coal-fired plants — Kosova A and Kosova B — which are among Europe’s worst polluters.

But the government earlier said the new plant, which will replace Kosova A, would burn 40 percent less coal and release 20 times less emissions.