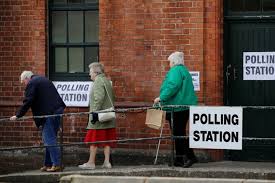 People leave after voting at a Polling Station in Sale, Britain, May 2, 2019. REUTERS/Phil Noble

With just under a third of English local council vote results declared, the Conservative Party had lost 212 councillors and the Labour Party had lost 54 councillors, according to a BBC tally. The Liberal Democrats gained 145.

More than 8,000 seats on English councils – administrative bodies responsible for day-to-day decisions on local policy from education to waste management – are up for grabs. Full results are due later on Friday.

The United Kingdom was due to have left the European Union on March 29, though May has been unable to get her divorce deal approved by parliament.

It is now unclear when, how and even if Brexit will happen but the current deadline for leaving is Oct. 31.