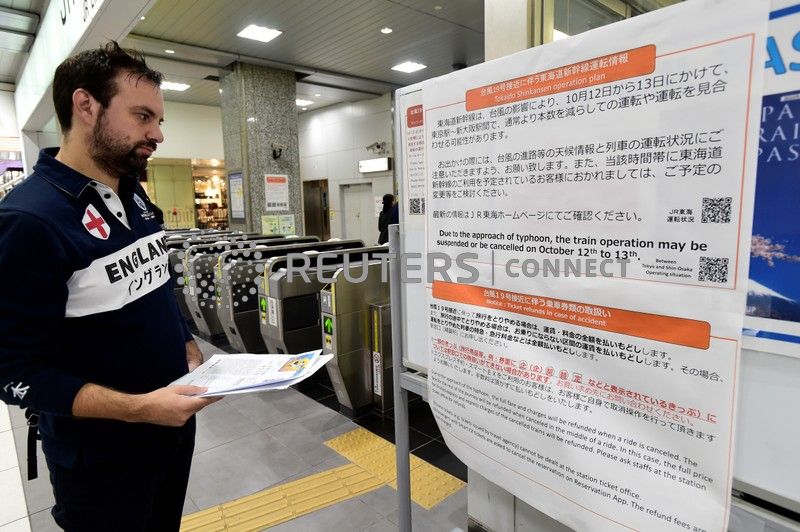 TOKYO (Reuters) – Rugby World Cup organisers were forced to call off matches for the first time in the tournament’s 32-year history on Thursday – eliminating Italy as a result – saying the risk from Typhoon Hagibis made hosting them an impossibility on safety grounds.

Italy’s game against New Zealand in Toyota and England’s match against France in Yokohama on Saturday have both been cancelled, while Sunday’s key game between hosts Japan and Scotland is in doubt, with a decision to be made on the day.

The sport’s governing body World Rugby and tournament officials said at a news conference on Thursday the decision had been taken due to the disruption expected from the typhoon, predicted to be one of the most violent to hit the region in recent years.

“While making every possible effort to put in place a contingency plan that would enable all of Saturday’s matches to be played, it would be grossly irresponsible to leave teams, fans, volunteers and other tournament personnel exposed during what is predicted to be a severe typhoon,” said Tournament Director Alan Gilpin.

Super typhoon Hagibis, which was swirling some 490 km (306 miles) south-southwest of Japan’s Chichijima island as of 9:00 a.m. (0000 GMT), is heading north toward Japan’s main island and could make landfall on Saturday.

Typhoon Faxai hit the Tokyo region on the eve of the tournament, with destructive winds of up to 216 kph (134 mph) causing transport chaos and power outages.

Tournament Director Gilpin defended the decision to hold the tournament, the first to be held in Asia, at this time of the year.

“We always knew there would be risks but it’s rare for there to be a typhoon of this size at this stage of the year,” he said, adding that he did not feel the integrity of the tournament had been compromised. “We have no regrets.”

Tournament regulations state that cancelled games are ruled a 0-0 draw, with two points going to each team, which condemned Italy to third place in Pool B.

The Italians, who could have qualified for the quarter-finals with a shock win over double defending champions New Zealand, had been due to hold a news conference on Thursday to announce their team for the match but it has now been scrapped. Team officials have yet to comment on the match cancellation.

New Zealand finish top of the group with South Africa going through as runners up.

While England and France were already assured of a spot in the quarter-finals the decision to cancel their game means Eddie Jones’s side finish top of the group.

“Of course everyone is disappointed. We wanted to play against France but the situation is the situation and we can’t control it,” said Jones, who had been warning about the typhoon risk almost since he took over as England coach almost four years ago.

“All we can think about now is preparing for the quarter-final and I think we will have an exceptional two weeks of preparation.”

If Japan’s game against Scotland falls victim to the typhoon the hosts would go into the quarter-finals for the first time.

Japan, who four years ago became the first team to fail to reach the knockout round after winning three pool games, would advance top of Pool A with Ireland likely to join them.

The Irish would need any sort of victory in their final game against Samoa on Saturday, or a bonus point in defeat, to go through, with Scotland then eliminated.

The Scottish Rugby Union said it expected the game against Japan to go ahead. “Scottish Rugby fully expects contingency plans to be put in place to enable Scotland to contest for a place in the quarter-finals on the pitch and will be flexible to accommodate this,” the SRU said on Twitter.

Thursday’s decision marks the first time a World Cup match has been cancelled since the tournament started in 1987.

The 1995 semi-final between hosts South Africa and France was delayed by an hour due to a waterlogged pitch, but famously went ahead after a team of cleaning ladies took to it with brooms.

The weather is also impacting other sports in Japan, with Tokyo 2020 Olympic organisers bringing forward the test event for BMX cycling and Formula One officials monitoring the situation ahead of Sunday’s Japanese Grand Prix.