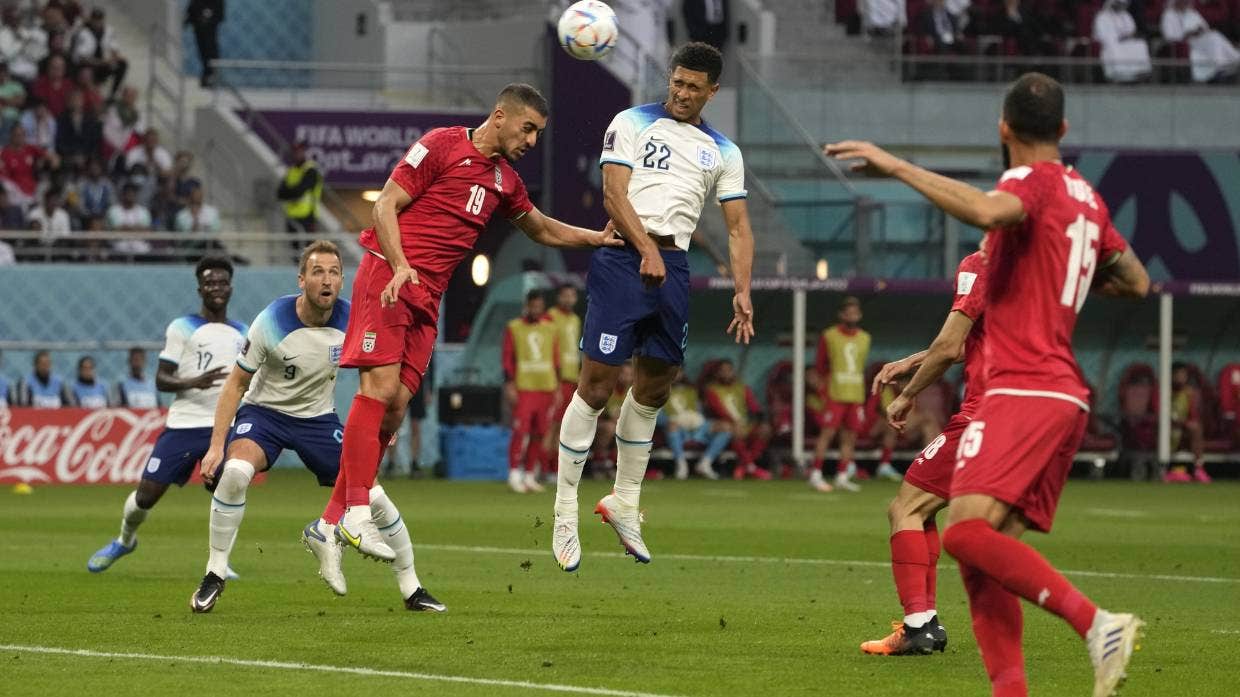 England midfielder Jude Bellingham heads his team in front during their 6-2 thrashing of Iran in Doha. Picture: STUFF SPORTS.

There was a lot going on at Doha’s Khalifa International Stadium: eight goals, 29 minutes injury-time, protests banned and performed, ticket problems and a concussion controversy, but the abiding takeaway was that England are real World Cup contenders.

Gareth Southgate’s team brushed off a six-match winless run to thrash Iran 6-2 with a dynamic display of attacking football.

The two exceptions to that Wembley starting lineup, 19-year-old Jude Bellingham and 21-year-old Bukayo Saka, were both on the scoresheet, along with Raheem Sterling, in an 11-minute first-half spell that settled Monday’s (Tuesday NZT) match.

“To win by that margin, to play as we did for the majority of the game, you’ve got to be really happy,” said Southgate.

The England manager added: “We were a real threat throughout the game – but we shouldn’t be conceding two goals at that stage. It is a great start, but we have to be better.”

There was controversy before kickoff. England players did take the knee, as part of their long-running stand against discrimination, but captain Harry Kane did not wear the OneLove armband after Fifa said he would be booked if he did.

Iranian players did not sing their anthem prompting an interruption in the TV feed in Iran where authorities interpreted it as being support of the anti-government protests engulfing the country.

In the stands some Iranian fans made thumbs-down gestures as the anthem was played, others wore shirts with the protesters’ slogan “Women, Life, Freedom”.

There was soon controversy on the pitch too. Harry Maguire was hauled down by a bearhug at an early corner, but even with VAR involved no spot-kick was given. Then Iran keeper Ali Bieranvand was KO’d by a clash of heads with his own defender Majid Hosseini as he tipped a cross away from Maguire.

Despite clearly being very groggy he was allowed to continue after eight minutes’ treatment. But almost immediately he went down again and was carried off on a stretcher.

UK brain injury charity Headway said allowing him to try and continue was “an utter disgrace” and “an abject failure” of the concussion protocol.

The long delay at least meant most of the England fans who had been held up gaining entry by problems with Fifa’s mobile ticket app were inside by the half-hour mark, which was when England suddenly upped the tempo.

After Mason Mount hit the side-netting and Maguire headed against the bar Bellingham broke the deadlock delicately heading in Luke Shaw’s cross. It was the Borussia Dortmund midfielder’s first England goal.

The second half began quietly but burst into life after Saka cleverly rolled in his second in the 62nd-minute.

Porto striker Mehdi Taremi scored an excellent consolation three minutes later but England’s four-goal lead was quickly restored by Marcus Rashford seconds after he was introduced from the bench.

Saka and Rashford were two of the players racially abused after missing penalties in that Euros final making their goals especially sweet.

In the 89th minute two more substitutes, Callum Wilson and Jack Grealish, combined to set the latter up for England’s sixth.

There was still time for Taremi to convert a 102nd-minute penalty, giving for grappling in the box.