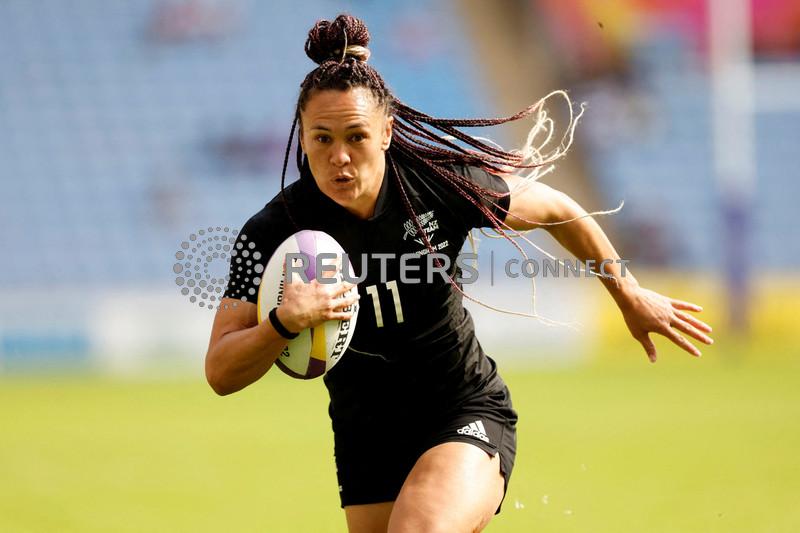 (Reuters) – The pervasive gloom hanging over New Zealand rugby grew a little thicker over the weekend as the nation’s stranglehold over the Commonwealth Games sevens was broken in Birmingham.

With the All Blacks’ woes looming large back home after their shock series loss to Ireland, the men’s and women’s sevens teams had hoped to boost the country by defending their gold medals from the Gold Coast Games.

Instead, the men’s team – champions at every Commonwealth Games bar one leading into Birmingham – missed out on the final for the first time courtesy of a 19-14 defeat to silver medallists Fiji.

The women, who beat Australia for the title on the Gold Coast, lost 17-12 in the semi-finals to the same team.

The New Zealanders rallied to win the bronze in each tournament, with the men beating Australia 26-12 and the Olympic champion women easing past Canada 19-12.

Though far from the colour they wanted, the medal was of some relief for the women after the semi-final let-down against eventual champions Australia.

“After we lost last night (Saturday) we sang our hearts out, sang all the depressing songs we could, so we could get it out (of the system),” said Woodman, who also suffered the indignity of having her hair pulled in a late tackle by Australia’s Maddison Levi.

“A medal is a medal, and we put out a really cool effort, not just today, but the whole tournament.”

Long seen as setting the benchmark in all formats of rugby, New Zealand is going through a rare rough patch, heaping pressure on the nation’s high-performance bosses.

The three-times world champions All Blacks have lost four of their last five tests to slip to fourth in the world rankings, triggering a coaching shake-up and setting the alarm bells ringing a year out from the World Cup in France.

The national women’s programme has also been under the microscope in the lead-up to hosting the women’s World Cup in October.

Long-serving head coach Glenn Moore, who guided New Zealand’s women to a fifth World Cup win in 2017, stepped down from the role in acrimony in April after allegations of mistreatment from a player sparked a review into the team’s culture.