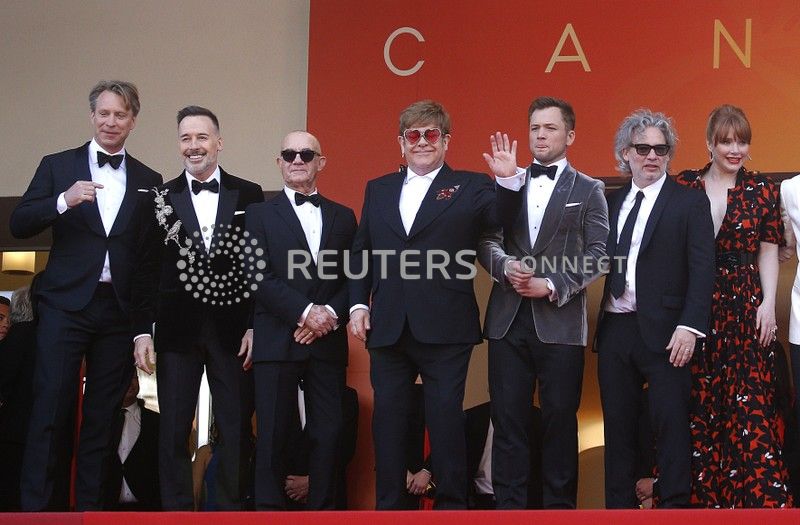 CANNES, France (Reuters) – Actor Taron Egerton said on Friday he’d developed a close friendship with Elton John while preparing for the biopic “Rocketman”, adding to the emotion after a glittering premiere where few of its stellar attendees were left dried-eyed.

The musical spectacular, which features one Elton John hit after another as it tracks the highs and lows of his journey to superstardom, made its debut at the Cannes Film Festival on Thursday, with the singer in tow on the red carpet.

Egerton said he was already an avowed fan of the singer – even auditioning to get into drama school by singing “Your Song” – and had gotten to know John well during filming, making it “borderline overwhelming” to step into his shoes on-screen.

“I’m very proud to call him a friend. He is the kindest, most interesting, warm man. That has made it feel very important to me,” Egerton told a news conference on the French Riviera, choking up at moments.

The British actor, also known for his role in spy comedy “Kingsman”, said he had delved into Elton John’s repertoire to prepare.

“You immerse yourself in his music. The invaluable thing was .. I was able to spend a lot of time with him and talk about anything,” he added.

The movie, which is not competing for awards at the cinema showcase, veers into traditional Hollywood musical territory. It mixes in elements of fantasy, as the hitmaker floats above the stage during a frenetic concert or descends into a drugged-fuelled haze surrounded by a writhing dance troupe.

“The response has been so wonderful … you made a young man from Aberystwyth incredibly happy and a 72 year-old rockstar even more happy,” Egerton said, fresh from performing “Rocketman” the night before alongside Elton John at a glitzy afterparty.

Directed by Dexter Fletcher – who contributed to making Freddie Mercury biopic “Bohemian Rhapsody” – the movie has so far drawn mixed reviews, with some critics questioning its sugary edges while praising the energy of the musical numbers.

“Fletcher has fashioned an ebullient monument to pop superstar Elton John that’s cliched in the telling, but gets by on the strength of his early catalog,” Variety critic Peter Debruge wrote.

The film was about John’s “lust for life”, Fletcher told the news conference, adding that it was not meant to show the singer as perfect.

“There was no dark corner where he didn’t want us to shine a light,” Fletcher said.

Madden, who has been talked up as a contender to play James Bond when Daniel Craig takes a step back from the franchise, brushed off the rumours on Friday – fuelled by his dapper red carpet appearance the night before in a white tuxedo.

“It’s very flattering to be involved in that conversation. It’s all just talk,” Madden said. “I’m sure next week it will be someone else.”