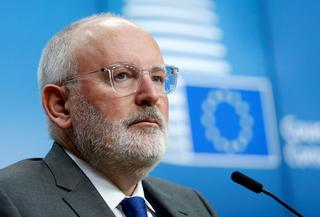 BRUSSELS (Reuters) – A deal hatched among several key European leaders to award a former Dutch foreign minister the post of EU chief executive broke down at an emergency summit on Sunday after eastern European and center-right European leaders rejected the plan.

Dutch socialist Frans Timmermans had appeared the favorite to replace Jean-Claude Juncker as president of the European Commission after the leaders of Germany, France and Spain agreed to back him while in Japan last week.

But they ran into unexpectedly tough opposition on Sunday from Poland, Hungary, Czech Republic and Slovakia. The summit dinner began three hours late after bilateral meetings to find a solution dragged on.

The impasse underlined the broader decision-making problem facing the EU’s 28 governments, who hail from a range of political groups, and who have struggled to respond to a series of crises in recent years from migration to the economy.

The summit is a third attempt to fill five top posts running the European Union for the next five years, forging policy for 500 million Europeans from November.

EU leaders were also meant to choose the next president of the European Central Bank (ECB), but that decision seems likely to be postponed for lack of consensus.

“There’s been a center-right revolt against Timmermans. They stand by their choice,” said one senior EU official at the summit.

The European People’s Party (EPP) says it won the most seats in May’s European election and thus under the bloc’s lead candidate, or Spitzenkandidat process, deserves the Commission president post. Its pick is Manfred Weber, a German EU lawmaker.

“The vast majority of EPP prime ministers don’t believe that we should give up the presidency quite so easily, without a fight,” Ireland’s center-right Prime Minister Leo Varadkar told reporters.

That was despite a decision by German Chancellor Angela Merkel, who leads the EPP bloc but has seen her political powers weaken, to acquiesce to French President Emmanuel Macron.