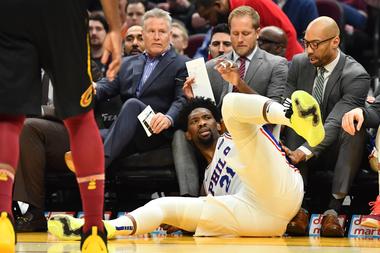 Feb 26, 2020; Cleveland, Ohio, USA; Philadelphia 76ers center Joel Embiid (21) stares back at the court after diving out of bounds into the 76ers bench during the first half against the Cleveland Cavaliers at Rocket Mortgage FieldHouse. Mandatory Credit: Ken Blaze-USA TODAY Sports

Collin Sexton scored 28 points on Wednesday as the host Cleveland Cavaliers posted a 108-94 victory over the Philadelphia 76ers, who lost three-time All-Star center Joel Embiid to a shoulder injury.

Larry Nance Jr. collected 13 points and a season-high 15 rebounds and Tristan Thompson had 14 and 13, respectively, as the Cavaliers posted their fourth win in five games.

Embiid sustained a left shoulder sprain after a collision with Cleveland center Ante Zizic with 49 seconds remaining in the first quarter.

The 7-foot Embiid winced in pain as he missed both free throw attempts before retreating to the locker room. Embiid briefly returned to the bench in the second quarter before he was ruled out for the contest at halftime.

Embiid’s injury is the latest for the 76ers, who are without Ben Simmons after the All-Star guard was injured during Saturday’s 119-98 setback in Milwaukee. Simmons is dealing with a nerve impingement in his lower back.