Els crunches the numbers in search of Presidents Cup edge 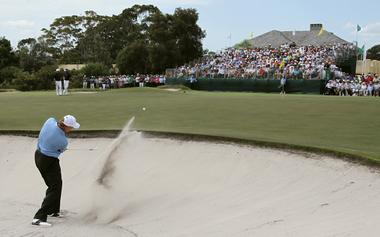 FILE PHOTO: International team member Ernie Els of South Africa plays a shot from a greenside bunker on the 10th hole during his first round foursome match of the Presidents Cup at Royal Melbourne Golf Club November 17, 2011. REUTERS/Brandon Malone/

(Reuters) – Captain Ernie Els hopes that crunching the numbers will help give his International team the edge over the United States at the Presidents Cup this week as they look to halt the Americans’ dominance in the biennial event.

The South African, who was part of the International team’s only victory in the 25-year history of the tournament in 1998, said the data had thrown up some surprises.

“The numbers haven’t shown exactly what I expected. It’s funny,” Els told the PGA Tour website. “A lot of the personalities I wanted together, the data shows they are not compatible.

“To convey that to the players has been tough. As you can expect, certain players want to play together — but I can show them if it is not compatible.

“Now the good thing is the guys are taking that in and actually listening to me whereas in previous years guys were quite adamant who they wanted to play with.”

Els will reveal his first pairings on Wednesday and said he was determined to stick to his guns over the data-driven approach at Royal Melbourne.

“I just have to keep my head down and keep stressing to the team it is about just that — the team,” he added. “The guys know where they stand. It’s very clear of what we expect and what we are doing on Thursday and Friday, especially.

“I have changed a little bit here and there where if a guy is not far off and they fit personality-wise, but I’m really sticking to my data.

“We have to try something different.”