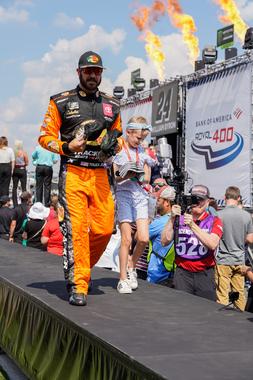 As he pondered his situation at the Charlotte Motor Speedway infield road circuit after practice on Friday, Chase Elliott called himself a driver in search of his groove. On Sunday, he quite obviously and very impressively had found that groove.

Elliott, who overcame a bad mistake when he whacked the tire-barrier wall on a restart with 45 laps left in the 109-lapper, took the lead for a final time in the Bank of America ROVAL 400 with six laps to go.

From there, he held off Hendrick Motorsports teammate Alex Bowman to get his victory, which was the sixth of his career.

“Holy moly, did you like that?” Elliott asked the crowd after getting out of his No. 9 Chevrolet.

The fans, of course, loved it. Elliott has after all, taken over Dale Earnhardt Jr.’s job as best-loved driver.

The margin of victory over Bowman was just over 3 seconds.

After the race, which was run with temperatures in the 90s, Bowman appeared to collapse next to his car and was taken to the infield care center.

“To come out of here sixth is great,” Byron said. “The pole was an awesome feeling. To lead laps was great. I think going into the next round we’ve got to be aggressive.”

Elliott arrived at the 2.32-mile, 17-turn CMS infield “roval” having already one road-course win on the season. But that was at the natural terrain course of Watkins Glen International. There is nothing natural about the CMS circuit and that caused Elliott to proclaim himself in need of finding “his rhythm” after the first practice Friday.

He lost that rhythm for just that one restart.

“What a mistake,” Elliott said. “You talk about messing something up.

“What day. Such a fast NAPA Camaro ZL1. In all honesty, that was the only reason we were able to get back in it. I pretty well blew it. I got the cautions at the right time and brought it home.”

Sunday’s was the final race of the three-race Playoffs Round of 16.

Bumped from the Playoffs as a result of the CMS cutdown event were Erik Jones of Joe Gibbs Racing, Ryan Newman of Roush Fenway Racing, Kurt Busch of Chip Ganassi Racing and Aric Almirola of Stewart-Haas.