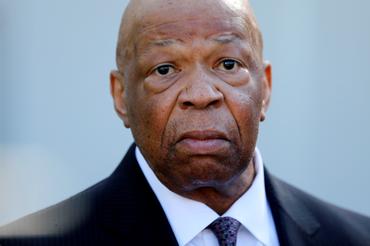 WASHINGTON – (Reuters) – U.S. Representative Elijah Cummings, a civil rights champion who over the last quarter century became one of the most influential Democrats in Congress and a key figure in the impeachment inquiry into President Donald Trump, died on Thursday. He was 68.

A powerful speaker with a formidable presence, Cummings had clashed with Trump on subjects ranging from congressional oversight of the White House to Trump’s attacks on Cummings’ native city of Baltimore, which the president called “rat-infested.”

Cummings died of “complications concerning longstanding health challenges,” his office said in a statement. He had been absent recently from Congress, to which he was first elected in 1996.

The barrel-chested Cummings was the son of African-American sharecroppers. He rose to lead the powerful House Oversight and Reform Committee, one of three congressional panels leading an impeachment inquiry that was launched on Sept. 24, after Trump asked Ukraine to investigate 2020 Democratic presidential rival Joe Biden. The panel has been involved in fights with the Trump administration over subpoenas challenged by the president.

In a time of particularly bitter partisan divide in Washington, top Democrats and Republicans alike voiced praise for Cummings on Thursday.

Senate Majority Leader Mitch McConnell, a Republican, said flags would be lowered to half-staff at the Capitol building to mark his death.

“In the House, Elijah was our North Star. He was a leader of towering character and integrity, whose stirring voice and steadfast values pushed the Congress and country to rise always to a higher purpose,” House Speaker Nancy Pelosi said in a statement.

She recalled that earlier this year, Cummings said: “When we’re dancing with the angels, the question will be asked: In 2019, what did we do to make sure we kept our democracy intact?”

Republican Representative Mark Meadows, one of the most conservative members of the House, said on Twitter of his Oversight Committee colleague: “There was no stronger advocate and no better friend than Elijah Cummings.”

Cummings told the Washington Post earlier this year that he considered Meadows a good friend, even though they disagreed on almost all issues.

Former President Barack Obama called Cummings “steely but compassionate” and said he “showed us all not only the importance of checks and balances within our democracy, but also the necessity of good people stewarding it.”