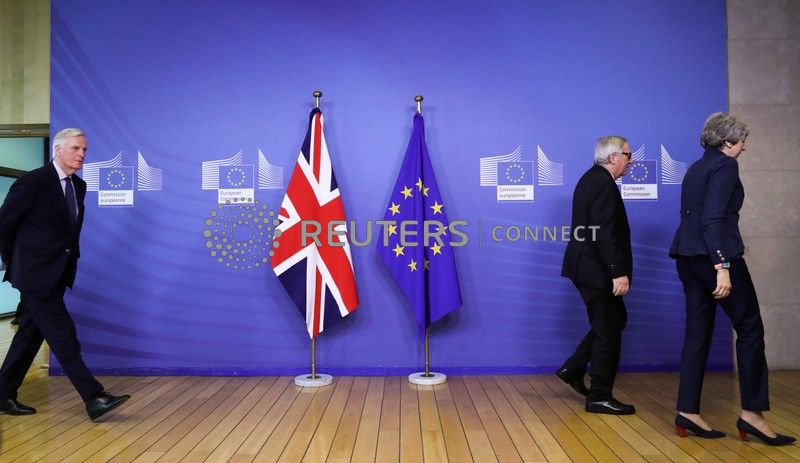 LONDON (Reuters) – If Britain’s parliament has not approved a Brexit deal by the end of February, Prime Minister Theresa May is likely to have to seek a delay to Britain’s March 29 exit from the EU as there will not be time to pass all the required legislation.

Currently, approval is far from certain as May tries to improve on the deal she had agreed with the EU, which parliament rejected last month by a record majority.

But even if she succeeds, it is only the start of a process, and the disorderly exit that many businesses fear remains a possibility.

To avoid this, parliament must pass a law formally ratifying the agreement – providing many more opportunities for wrangling. It also plans a host of related bills and legal tweaks.

The law to ratify the deal cannot even be introduced to parliament until it has approved May’s deal. No date has been set for that vote, but it is not expected to be before Feb. 14, when lawmakers will hold a more general debate on Brexit.

After Feb. 14, parliament has just 26 sitting days left before March 29.

While two senior ministers have said an extension to the Article 50 negotiation period may be needed, May has stuck to the March 29 date.

Maddy Thimont-Jack of the Institute for Government said even a month would barely be enough time to get everything passed: “The later it gets in February, the more difficult it gets.”

The government is also required by law to lay a treaty before parliament 21 sitting days before it can be ratified, although it can seek an exemption.

Stephen Laws, a former First Parliamentary Counsel overseeing the drafting of government bills, said that, even if parliament was willing to cooperate and the government made concessions, time was running out.

“Once you get past the middle of March, the idea that you are going to get a Withdrawal Bill through by March 29 has to go out of the window,” he said.

Even if the government does want to postpone Brexit, the date is fixed in British law, so the approval of both chambers of parliament would be needed to change it.

The government could try to force legislation through on an accelerated timetable — in theory, laws can be passed in a day — but this would require the goodwill of a parliament that has already thwarted the government several times.

The legislation has to pass several stages in both the House of Commons, the lower house where May’s Conservatives do not have a majority, and the House of Lords, where she has less control over timing.

The Withdrawal Agreement Bill would give ministers the power to make financial payments to the EU and also give effect to what is agreed on the issue of the Northern Ireland border, the source of many lawmakers’ opposition to May’s deal.

According to the House of Commons Library, there were more than 100 parliamentary votes during the ratification of the EU’s Treaty of Lisbon and 88 on the EU’s Maastricht Treaty — issues less momentous than Brexit. Party rebellions on the latter nearly toppled the Conservative prime minister of the time, John Major.

“There are going to be contentious aspects to the bill … so you can expect that there will be some tight votes,” said Thimont-Jack. “If MPs feel like the government is rushing through that legislation, not giving them sufficient time to consider it … those majorities might disappear.”

And if May has only won parliament’s backing for her overall deal by a small majority, this could “unravel” during the passage of the legislation to ratify it, one Conservative lawmaker has warned.

The government also plans to pass several other major new bills and hundreds of changes to existing law to adapt Britain to life outside the EU, covering areas such as agriculture, fisheries and immigration.

It has not made clear whether it believes all must be in place before Britain leaves. Trade minister Liam Fox said on Wednesday the government had contingency plans in case the Trade Bill had not passed.

If Britain leaves with a deal, parliamentary experts believe most of that legislation could be dealt with during a planned post-Brexit transition period.

If it fails to reach a deal, however, the need would be more pressing and there would additionally need to be a Financial Services Bill, which gives Britain powers to implement EU financial services regulations.

Barclay said last month that, if there was no deal, the government would have to “prioritise what is essential”.

The more contentious elements of these pieces of legislation could be stripped out or bills could have “sunset clauses” inserted, meaning they would need to be revisited later, to speed up their passage.

“It’s likely to be the only way to get those bills through in a hurry,” Stephen Laws said.

Most are currently stalled; many lawmakers believe the government is avoiding bringing them back to parliament in case they are amended to add conditions.

“There will have to be a call at some point to say: ‘Actually we can’t delay it much longer, the risk of no deal really is there and we need to get this legislation through’,” said the IFG’s Thimont-Jack.