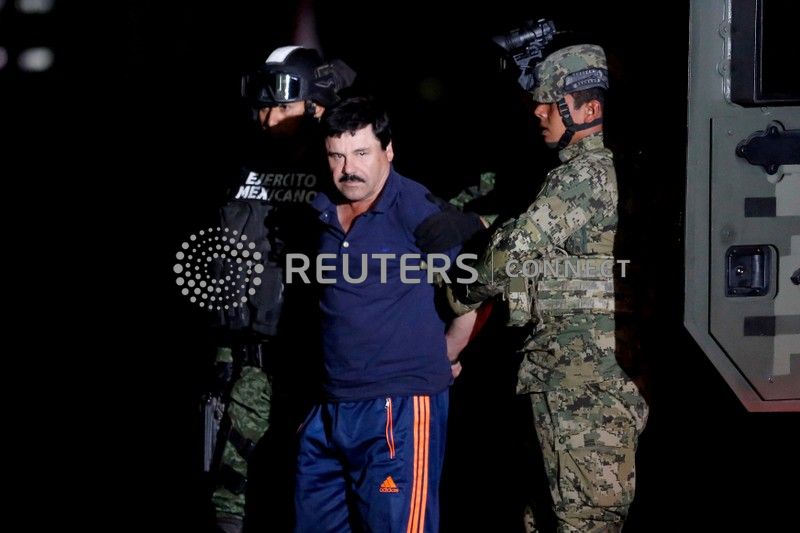 NEW YORK (Reuters) – The jury weighing the fate of accused Mexican drug kingpin Joaquin “El Chapo” Guzman on Monday appeared focussed on the main charge against him, whether he engaged in a continuing crime spree that could land him in prison for life.

Jurors left the federal courtroom in Brooklyn after failing to reach a verdict in their fifth day of deliberations, which began on Feb. 4. They are expected to resume deliberations on Tuesday morning.

Guzman faces 10 criminal counts related to what prosecutors say is his trafficking tons of cocaine, heroin, marijuana and methamphetamine into the United States as leader of the Sinaloa Cartel, named for his home state in northwestern Mexico.

The defendant escaped twice from maximum-security Mexican prisons before his most recent capture, in January 2016. He was extradited to the United States a year later. Small in stature, Guzman’s nickname means “Shorty.”

On Monday, the jury reheard or were given testimony from two federal officials who testified during Guzman’s trial, which began three months ago.

Jurors also asked the trial judge, U.S. District Judge Brian Cogan, whether they had to agree unanimously that the government had proven, or not proven, Guzman’s criminal responsibility for individual drug shipments.

Cogan directed them to review his earlier jury instructions for an answer.

The requests suggest that jurors might be focussed on the first and most complex of the counts Guzman faces, whether he had been “engaging in a continuing criminal enterprise.”

That count includes 26 different alleged drug violations, many involving tons of cocaine, and calls for jurors to decide whether Guzman was criminally responsible for three or more as part of a “continuing series of violations.”

The defence has said Guzman was set up as a “fall guy” by Ismael “El Mayo” Zambada, a Sinaloa drug kingpin who remains at large. Prosecutors have said Guzman and Zambada were partners.

More than 50 witnesses testified during the trial, including 14 former Guzman associates who agreed to cooperate with U.S. prosecutors.

The cooperators offered detailed accounts of the Sinaloa Cartel’s inner workings and Guzman’s purported role as boss, including his penchant for murdering his enemies.