Eight tie in U.S. spelling bee as organisers run out of challenging words 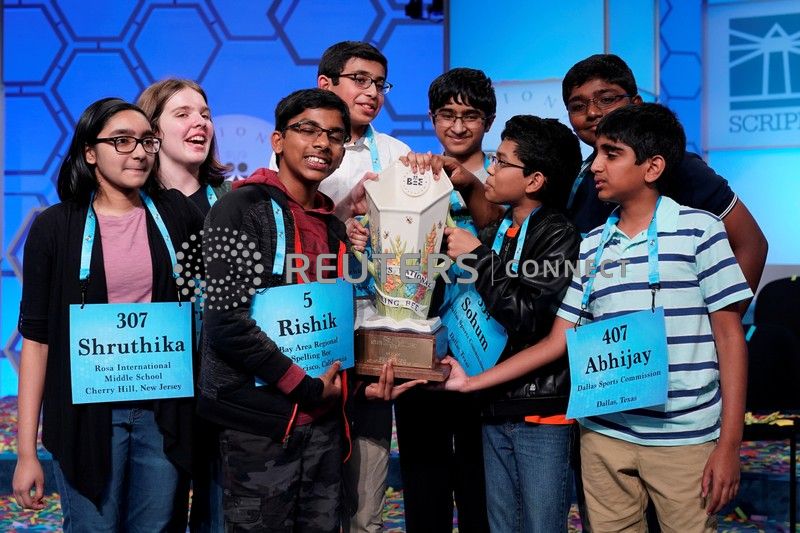 OXON HILL, MD. (Reuters) – Eight young super spellers beat the dictionary to be crowned co-winners of the Scripps National Spelling Bee, in what officials said was a first since the U.S. word contest started in 1925.

After a marathon session stretching into early Friday, the contestants simply could not be separated. Each winner received a $50,000 (39,647.9 pounds) prize and a trophy – and they coined their own word for their joint success, “octochamps.”

The competition started on Tuesday with 562 word whizzes from across the nation, U.S. territories and six other countries: the Bahamas, Canada, Ghana, Jamaica, Japan and South Korea.

Officials say that while there have been co-champions in the past, there have never been eight.

The final round that started on Thursday night was televised live across the United States.

As the tension mounted, the young scholars worked out the correct order of vowels and consonants in words such as bougainvillea, a type of climbing plant; aiguillette, braided loops hanging on a military uniform shoulder; and pendeloque, a diamond or gemstone cut in a pear shape.

Late on Thursday, as a handful of remaining children notched up answer after answer, officials announced a rule change: All remaining spellers at the end of Round 20 will win.

“It was a decision made earlier today,” said bee director Paige Kimball, who won the bee in 1981.

An official had told her late on Thursday, looking at the list, “we were running out of words to challenge this group,” she recalled.

Eight remained a little after midnight.

“They have a lot of grit,” said Kimball. “Most of them will tell you they have been working on this for years … they are just the top of the top, clearly.”

The crowd went wild as each competitor stepped up to the microphone and successfully spelled their word in the final round, cementing their status as a co-champion.

The eight winners have decided to call themselves “octochamps.”

“I’m just really in shock that this happened,” Sundar said.

Another winner, Serrao, said, “I think all of us were rooting for each other.”

Kodali, the youngest of the group said, “It feels amazing that I’m here with all these amazing spellers.”