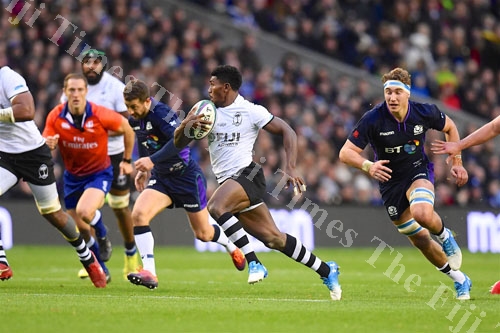 Frank Lomani on the attack against Scotland. He has been named for the Pacific Test Series. Picture: IAN MUIR.

FLYING Fijians head coach John McKee has included eight local players for the upcoming Pacific Test Series incorporating the Maori All Blacks and Pacific Nations Cup prior to selecting his squad for the Rugby World Cup in Japan later this year.

McKee said these players have been in their best form playing for their provincial clubs in Skipper Cup, Fiji Airways Fijian Drua and in the Swire Shipping Fijian Latui team.

“In the last two years we have seen improvement of the level of the local players and I think that’s mainly testament to the Fiji Airways Fijian Drua and the new Swire Shipping Fijian Latui squad. I also think our Under-20s and academy programs have gotten stronger,” McKee said.

McKee said he is happy that all the players have declared their availability and are injury free heading into the camp on the 1st of July here in Suva.

Fiji Airways Flying Fijians kick off their campaign against Maori All Blacks on the 13th of July at ANZ Stadium.

They then play a return match in Rotorua on the 20th before preparing for the PNC.