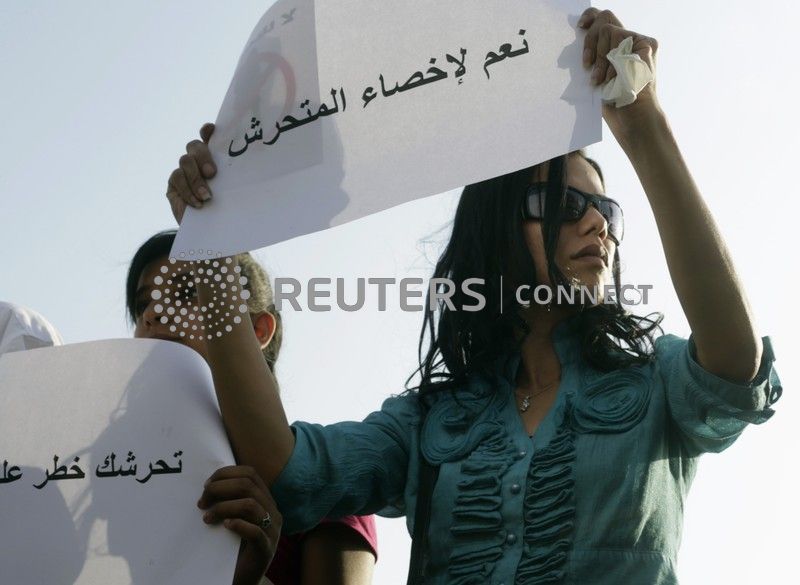 A female protester holds a sign reading "Yes to castrating the sexual harasser" as she joins others protesting against sexual harassment, after a woman was sexually assaulted by a mob during Sunday's celebrations marking the new president's inauguration, in Tahrir Square in Cairo June 11, 2014. Egyptian authorities have arrested seven men for sexually harassing women near Cairo's Tahrir Square while thousands celebrated the inauguration of President Abdel Fattah al-Sisi, the Interior Ministry said on Monday. A video posted on YouTube on Sunday, claiming to depict one of the Tahrir assaults, showed a naked woman with injuries on her hip being dragged through a large crowd at night towards an ambulance. REUTERS/Asmaa Waguih (EGYPT - Tags: CIVIL UNREST POLITICS ELECTIONS CRIME LAW) - GM1EA6C00IF01

CAIRO (Thomson Reuters Foundation) – An Egyptian Instagram activist welcomed a court decision on Sunday to jail a former university student for eight years for sex crimes after her campaign against his abuse and harassment of women sparked a MeToo movement in her country.

Ahmed Bassam Zaki, aged in his early 20s and from a wealthy family, was detained last July after the Instagram campaign and referred to trial on charges of indecent assault and blackmail of at least three women, all under 18, between 2016 and 2020.

A Cairo Criminal Court sentenced him to eight years in prison on Sunday, the women’s lawyer Ahmed Ragheb said on Facebook. Another court in December jailed him for three years for harassing two girls online.

It led to led to hundreds of women speaking up on social media about sexual abuse and exposing several men including a high-profile rape case that took place at a Cairo hotel in 2014.

“We are very happy with today’s verdict because we have worked a lot on this and we are now reaping fruits,” Nadeen Ashraf, the founder of Instagram account Assault Police that revealed the case, told the Thomson Reuters Foundation.

Neither Zaki’s lawyers nor his family were available to comment.

Ashraf was a student at the American University in Cairo when she decided last year to set up Assault Police after she heard allegations from friends at the university about Zaki.

Ashraf said her goal was to change attitudes in Egypt towards women who experience sexual assault.

“Society always blames the victim, not the one who does the harassment. And even if they do not blame her, they pressure her to keep silent about it,” she said in an interview last year.

Judicial sources said Zaki can appeal against Sunday’s ruling before the court of cassation, Egypt’s top civilian court. He has already appealed against the December ruling.

Zaki’s case sparked a massive online movement after emerging last July in Muslim-majority Egypt, a country where a United Nations survey in 2013 found 99% of women had experienced harassment.

Responding to the growing public debate over women’s safety, parliament passed a law in August giving women the automatic right to anonymity when reporting sex crimes in the conservative nation in a bid to encourage more to report sexual assaults.

“It is a statement affirming that there is no place for silence today or fear of social stigma,” he told the Thomson Reuters Foundation.