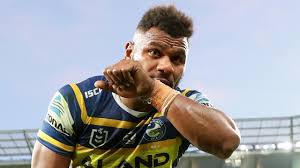 Parramatta Eels and Fiji Bati winger and strong man Maika Sivo has compelled his coaching staff to double down on the amount of weights he lifts at training.

“We’ve had to really pull back on his weighs because he’s so big and strong, and he doesn’t carry any body fat,” Eels coach Brad Arthur told NRL 360.

“If you have any doubts about that, just ask Roosters fullback James Tedesco. They’re still digging him out of the Bankwest Stadium turf after being steamrolled by Sivo last week.”

The Momi flyer made headlines during pre-season when reports claimed he had maxed out at squatting 285 kilograms in the Eels gym, and showed his strength steam rolling through Sydney Roosters fullback Mike Tedesco to score a try despite losing  24-10 during round six of the National Rugby League.

Arthur told NRL 360 the club’s conditioning and coaching staff have actually limited Sivo’s weights sessions in case he gets too big.