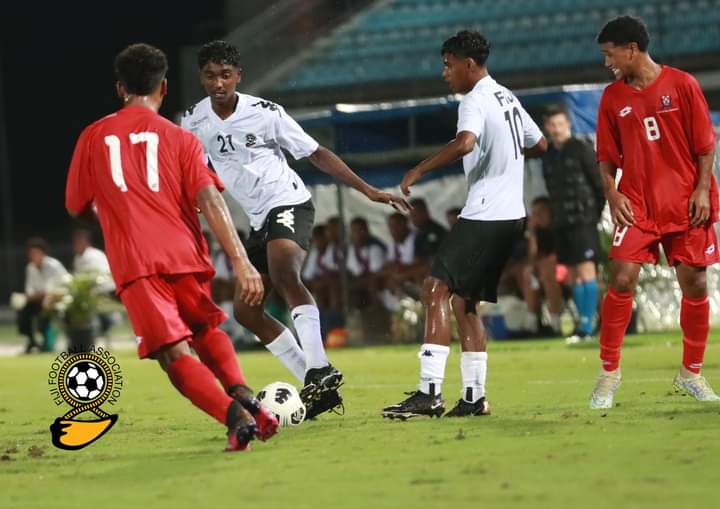 Action from the match between the U-17 Bula Boys and Tonga. Picture: FIJI FOOTBALL ASSOCIATION

We are just one win away from a shot at the FIFA Under-17 World Cup in Peru later this year.

That’s all it’s going to take for the Baby Bula Boys. This news may not have attracted as much attention as major events such as the World Rugby 7s Series, or the upcoming Fijian Drua game, however, for soccer fans, this is big news.

In fact it is inspiring for the nation. It is great to know that we may have a chance to mix it with the big boys of the sport in Peru. The equation gives us hope and quite a bit of motivation to reach out for the stars so to speak.

For when you consider how long fans have waited for the Bula Boys to make it to the FIFA World Cup, we have to give our youngsters credit for making it this far. This should be the base we build our campaign on.

This should be the motivation we need to realise the dreams of Fijian soccer fans. The ultimate goal should always be to get our top team to the World Cup, competing against the best in the world.

Fans would love to see the best of the crop from Fiji taking on the likes of the Messis, Ronaldos and Mbappes of the sport at the highest level one day. We have done that in 7s and 15s rugby, in rugby league and in netball when we account for team sports.

Without a doubt, soccer is a key sport attracting thousands of fans right here at home. So this week we look up to our Baby Bula Boys to rise up to the challenge. We look up to them to carry our hopes and aspirations, and to give this event their best shot.

We may, however, be looking at a massive mountain to climb this week, because we have to defeat Oceania favourites New Zealand in the OFC U17 Championship semi-finals tomorrow in Suva.

We know the other team travelling to Peru will be decided by Tahiti and New Caledonia. This is why we will have to get behind our team, and motivate them to play the game of their lives. Fiji coach Sunil Kumar wants fans out there at the Laucala Bowl.

He wants fans to get behind the team, and to motivate them against the hot favourites. The players, he said, were fully aware of the responsibility they carry when they will don the white jumper tomorrow.

To get to the semi-finals, Fiji had to fight hard to beat the Cook Islands 3-0 on Sunday, and Kumar gave credit to the huge fan turn-out, saying the players were happy to see so much support. S

pirits are high in camp and there is an unmistakeable sense of hope. We say go Fiji, go!