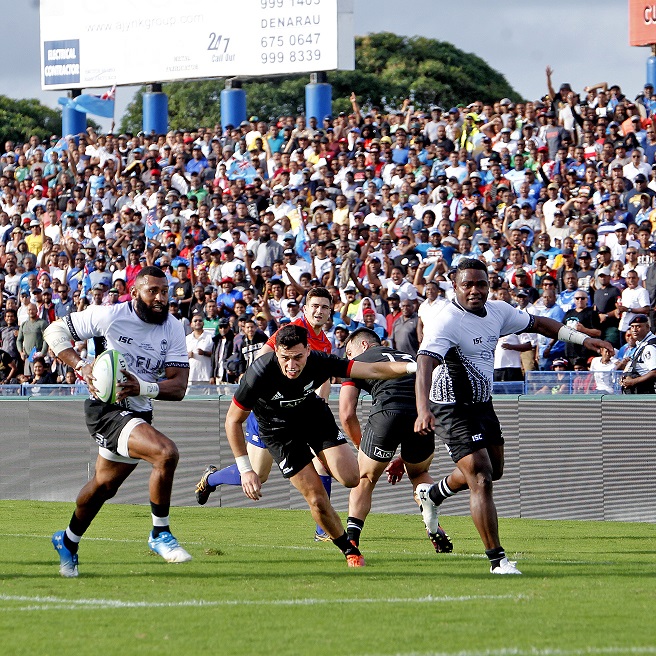 Who would have thought the Flying Fijians would rock up to the national stadium and send the New Zealand Maori to the cleaners?

Yesterday was a perfect lesson in self-belief, for Fijian fans and the Flying Fijians.

National coach John McKee and the Flying Fijians did much more than beat the Maori.

The 27-10 scoreline was a shocker and a breath of fresh air all wrapped in one.

It was an emotional experience for Fijian fans.

It was confirmation of the mental fortitude that is now ingrained in our team.

McKee has slowly, but surely developed a culture that is changing the face of our rugby.

The transition started with the foundation of our scrum.

We came of age when we held the English and Australian scrums.

We seem to have taken a step forward in terms of our rolling maul.

It was unusual yet quite pleasing to see the Flying Fijians execute a rolling maul against the power-packed Maori in the dying minutes of the game.

That drove through two important points.

We were effective in the maul, stayed composed under sustained pressure from the Maori, and were still competitive to the very last minute.

He got that, and much more yesterday from a team that was receptive to his directives.

McKee said it was the best start to a long campaign ahead.

“We put in the hard yards weeks before and it was really pleasing to see the boys fight for each other,” he said.

It isn’t over yet.

Emphasis now shifts to ironing out minor issues before next week’s return game against the Maori in Rotorua, New Zealand.

“We turned over some ball in the first half and we will need to work on this and some other areas before we head to Rotorua,” he said.

The Kiwis will no doubt be keen to make amends as well next week.

It sets the stage for a tough return clash.

But we have shown that we can make things happen when we find our rhythm.

We proved that against the French in that historic Test win in Paris on our Europe tour last year.

For now though, attention will be on how we prepare for next week.

There is excitement in the air.

Remember we still have big names such as centre Semi Radradra, backrower Peceli Yato, utility backliner Vereniki Goneva, and inside centre Jale Vatubua who did not play yesterday.

There will be interest though on McKee’s choice considering our backrow yesterday of Semi Kunatani, Dominiko Waqaniburotu and Viliame Mata were powerful as well as our centre partners of Levani Botia and Waisea Nayacalevu.

For now though, attention should shift to preparation.