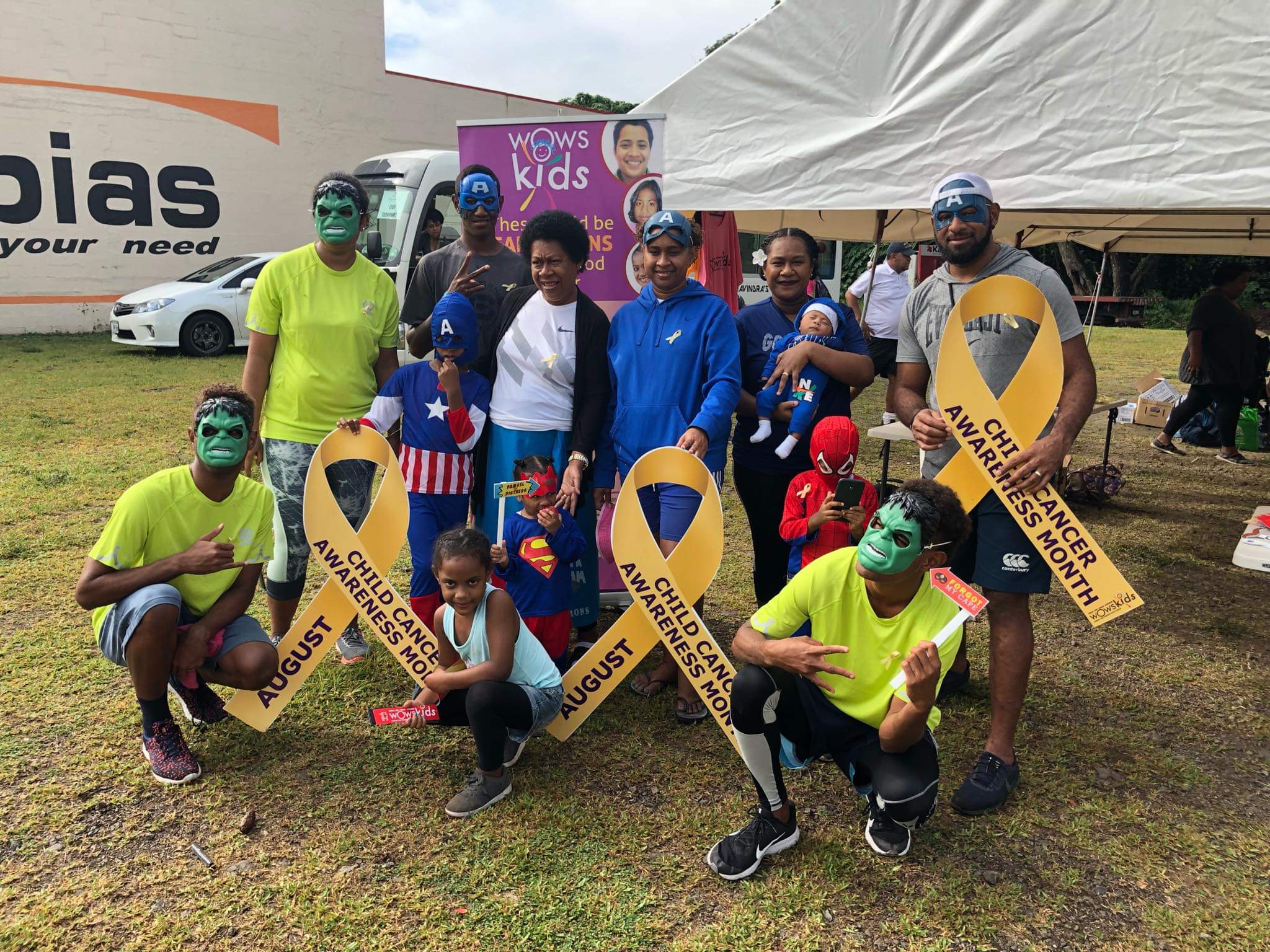 Jasa Veremalua with his family during the WOWS Kids Fiji fun run in Sigatoka. PICTURE: SUPPLIED.

The weather wasn’t on their side yesterday.

It didn’t deter organisers of the Walk On Walk Strong (WOWS) Kids Fiji walk and fun run in Sigatoka yesterday though.

It rained throughout the night, and as dawn broke in the Western town, the rain didn’t seem to be going anywhere.

It was cold as well. But when all things were said and done, participants turned up in numbers.

They walked on, and walked strong.

They were either family members of kids living with cancer, friends, knew of someone who suffered from it, or had a child suffering from it, or they were there to show their support for what they believed was a worthy cause. Dressed in superhero costumes, they inspired organisers.

At the end of it all, WOWS Kids Fiji team leader Viola Lesi said she was overwhelmed by the huge turnout.

She urged participants to take heed of the early signs of childhood cancer.

“We are just trying to push to parents and families the need to take heed of the early signs of childhood cancer because the earlier the cancer is detected in their children, the better their survival,” Ms Lesi said.

“For us in developing countries, our best protection is early detection so we need to be more vigilant with that.”

The thought of cancer is frightening for many people.

That is the harsh reality when we discuss cancer. Family members of those suffering from the illness go through an emotional rollercoaster ride.

It can be daunting. It can be frustrating, tiring, and at times, will inch out feelings of insecurity, doubt, and raise stress levels. This month is Child Cancer Awareness month.

It’s a month when WOWS Kids Fiji, an organisation set up to cater for young cancer sufferers, works on creating awareness about child cancer.

There have already been four deaths related to childhood cancer recorded at the Colonial War Memorial Hospital in Suva for this year alone.

Cancer does not care about status.

It does not care about wealth, personal leanings and power.

It can leave an indelible impression on the mind when a very close family member suffers from it. There is great fear attached to this sickness.

In the face of that fear that hovers around every form of cancer though should be the realisation that there is hope in early detection.

That is a critical message that organisations such as WOWS Kids Fiji are keen to get across to as many parents and guardians as possible. There is motivation and inspiration in the work they do daily.

There is personal satisfaction in being able to reach out to assist parents and guardians in their hour of need, providing moral support, and being there when some children unfortunately count down the days before death embraces them.

When families are affected, being able to deal effectively with the emotions that are triggered can be difficult and sometimes overwhelming. It isn’t something for the faint-hearted.

There is a lot of work behind the scenes to reassure family members of children suffering from cancer.

This is why the message of early detection must reach Fijians.

There is no room for ignorance. Early detection can make a difference.