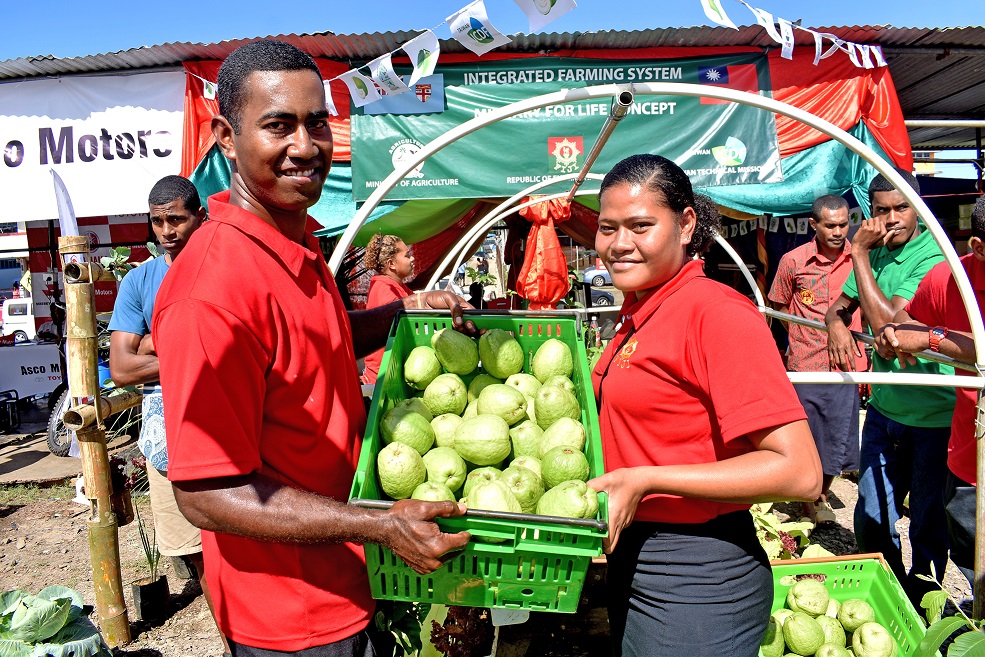 Republic of Fiji Military Forces Private Salesi Rakida and Private Titilia Marama with a case of of hybrid guava during the 2019 Agriculture Show at Valelevu Grounds yesterday. Fiji's National Adviser on NCDs Dr Isimeli Tukana believes part of the four million trees planted through the 4 Million Trees in 4 Years program should be fruits and orchids. Picture: JONA KONATACI

NON-communicable diseases have become big news these days for many reasons.

Around 38 million people die from NCDs across the world.

Minister for Health and Medical Services Dr Iferemi Waqainabete is on record, suggesting Fiji was not alone in the fight against NCDs.

In the face of the frightening statistics though sits a solution that has been staring at us in the face.

All the solutions to Fiji’s NCD problems, said national adviser for non-communicable diseases Dr Isimeli Tukana, can be found within the agricultural sector.

Speaking during the agriculture show at Valelevu, Nasinu yesterday, he said the solution was there.

“We are looking for solutions, the solution lies in the agriculture sector,” he said.

Dr Tukana believes part of the four million trees planted through the 4 Million Trees in 4 Years program should be fruits and orchids.

“The biggest source of iron in the country is ota, saigan, watercress and rourou, so in saying that, if we are to fight anaemia in this country, we need to plant a lot of those and let it be part of the four million trees initiative,” he said.

This, he said, was a simple solution.

He raised the issue of eating habits.

Dr Tukana said he hoped that people would come out in numbers and see that they could plant where they lived, learn, and play in the fight against NCDs.

Last year, Prime Minister Voreqe Bainimarama made no bones about the impact of NCDs on our economy and the nation.

At a high-level meeting on NCDs at the UN headquarters in New York in September last year, he spoke about the fact this had prompted Government to use a huge amount of its national budget to upgrade the health sector and invest in medical specialist training.

NCDs, he said, were critically problematic around the world, but in small island developing states, the urgency was even more evident.

He said it was an issue that cut lives short, held back our economy, and threatened the future of our nation.

That was why, he said, Government had pledged action, and was taking a holistic approach to find solutions that he insisted could turn the tide for a healthier, happier, and more prosperous future for our children and grandchildren.

This focus of attention on NCDs is good for the nation.

It is encouraging to note the attention being placed on NCDs and the energy and drive to start a process that is dedicated to nurturing healthy habits.

But prevention is quite critical to decrease NCDs death rates.

The risk of developing NCDs could also be lowered by Fijians making healthy choices.

We should be aware of information about NCDs.

Let us try to understand and appreciate the changes that must happen in our lives.