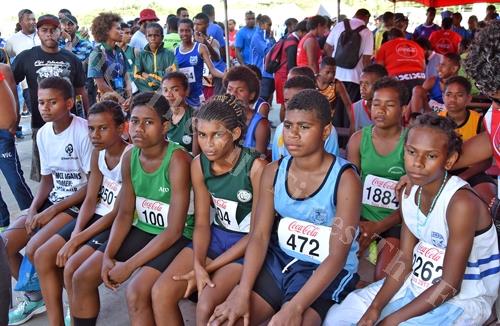 Athletes wait for their events during the second day of the Coca-Cola Games last year at the ANZ Stadium in Suva. Picture: FT FILE

It’s that time of the year again when school athletes around the country start the countdown to the popular Fiji Finals.

High school athletes are already gearing up for their inter-house competitions. Some have completed their competition over the past few days.

This is the start of a journey most athletes will hope ends at the Fiji Finals.

That’s when thousands of students from around the country, their fans, schoolmates, former students, and parents and guardians will converge on the National Stadium in Suva for three days of action-packed, fun-filled days of top class athletics action.

As usual, the athletes will be hoping to turn heads, attract attention and win a medal in what is arguably the biggest sporting event of its kind in this region.

It’s an event that has long captured the imagination of Fijians every year.

It’s developed a huge following and continues to grow in popularity and fame.

That’s when the elite athletes in our school system are exposed to a level of competition that is actually quite high.

This is where the best of our high school athletes converge to test themselves.

They would have prepared themselves to arrive in Suva in the best shape of their lives.

Every athlete who gets the opportunity to grace the National Stadium would be raring to prove a point for their school, their family and fans, their old scholars and most importantly, for themselves.

Many would be trying to emulate their heroes.

More than 2000 athletes from high schools around the country were part of the 2018 event.

More than 2600 athletes were part of this amazing event in 2019, representing 154 schools around the country.

It is getting difficult to shrug off the impact the Fiji Finals has on the imagination of students, fans and parents around the country.

It has a special place in their hearts and minds for many reasons.

The internet and high visibility in the media have all contributed to raise the profile of the event.

The involvement of former students has also seen a rise in spectator numbers and intensity in preparation.

All that starts at the inter-house competitions though.

That’s the base from where our young athletes will launch their athletics careers from.

As we continue to witness inter-house competitions around the country, we wish every athlete the very best in their endeavours to reach out for the highest pedestal.

There is a need for hard work.

There are rewards though for those who will make sacrifices now to achieve their dreams.