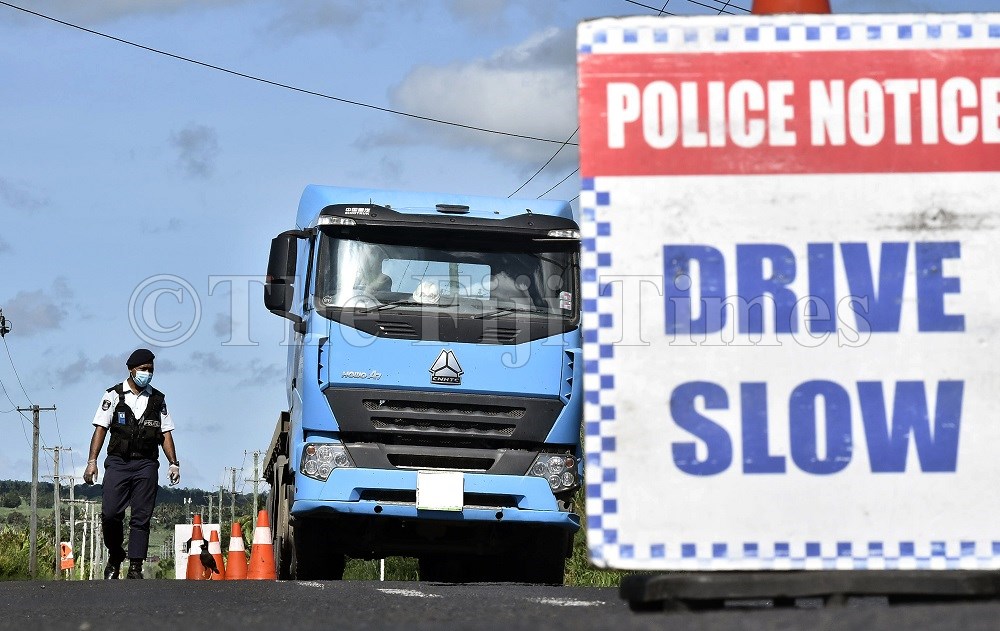 A police officer checks vehicles at a checkpoint at Drasa in Lautoka. Picture: BALJEET SINGH/FT FILE

Within the 12 hours that ended yesterday, we are told police booked 128 drivers for speeding in the Western Division.

We agree with the police that there has to be great care taken on our roads this weekend. According to a police statement, other bookings recorded during the reporting period were for careless and inconsiderate driving, failure to wear a seat belt, and one case of drunk driving involving a 33-year-old taxidriver who was arrested in Nadi.

The statement confirmed traffic officers would be out this long weekend and random breathalyser tests would be conducted.

“Everyone shares equal responsibility when it comes to road safety and we urge both drivers and pedestrians to be alert at all times,” it stated.

We have been given fair warning. Every year we have road safety campaigns that target how we use our roads. There are road safety tips given and there is an expectation that road users would adhere to road rules.

The whole idea behind this is to ensure there is safety on our roads, and lives are protected. However, accidents happen because we allow them to.

As we anticipate a rise in traffic movement around the country, let’s remind ourselves to be vigilant. The World Health Organization states approximately 1.3 million people die each year as a result of road traffic crashes. It states road traffic crashes cost most countries 3 per cent of their gross domestic product and that injuries from these crashes are the leading cause of death for children and young adults aged 5-29 years.

Developing economies, it states, record higher rates of road traffic injuries, with 93% of fatalities coming from low- and middle- income countries. In addition to the human suffering caused by road traffic injuries, it said, they also incur a heavy economic burden on victims and their families, both through treatment costs for the injured and through loss of productivity of those killed or disabled.

These are costs we do not see upfront. However, they must factor in our considerations when we make plans to travel. Back on the homefront, as we look ahead to meeting up with family and loved ones this weekend, or simply plan a road trip for the family, let’s be alert.

Let’s plan our journey well and stick to speed limits.

Let’s be responsible and considerate on the road, and let’s place value on staying safe.