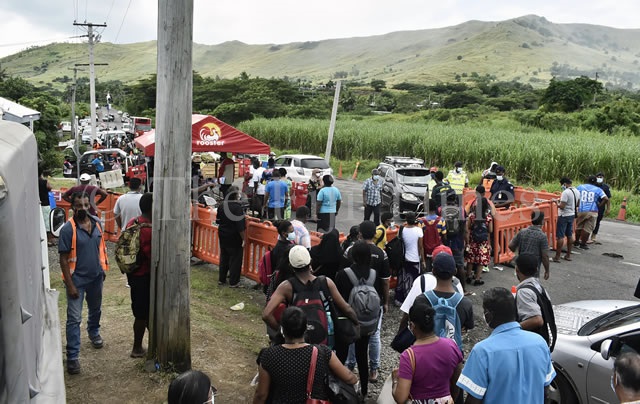 People queue up at Tuvu border in Lautoka to return to Suva. Picture: BALJEET SINGH/FILE

Let’s face it! There can be no doubts about the fact that there is more movement of people around the country.

There is more foot traffic. Subsequently, it seems this is raising the number of vehicles on our roads.

The easing of restrictions is actually getting people on the ground again. They are making the most of it.

Urban centres are starting to fill up.

And this is reflecting on the number of people who are out and about.

As of October 4, all workplaces, tertiary institutions, houses of worship, hotels, restaurants, cafés, cinemas, gyms, pools, and tattoo parlours were allowed to open at 70% capacity, but only to fully-vaccinated persons.

When the doors of these venues open, the PM mentioned, all other COVID-safe measures must be strictly enforced.

That means masks must be worn, two metres of physical distance should be maintained where possible, and careFIJI must be installed on everyone’s phones, with Bluetooth switched on.

He warned though that these relaxations were “not for anyone to tread carelessly”.

“We’re introducing new regulations that allow for spot checks on venues, businesses and houses of worship,” he noted at the time.

“Those who do not respect these measures risk serious fines or being shut down. I repeat you will be fined heavily or shut down if you do not follow these regulations.”

Today, as we reflect on how far we have come since the second wave struck in April, we are reminded about what needs to be done moving forward.

For as much as we may want this to be the way things go, and that we can continue to remain open, the onus is really on us to watch what we do.

We can never to be too careful.

The last thing we want is falling back a few steps because we allowed the virus to take a grip again in the community.

The national 7-day average daily test positivity is 5.2%, which is on a downward trend, but as the good doctor points out, it still is indicating a high level of community transmission.

This continues to be a major concern. It must alert us to the dangers around us. So as we continue to slowly get back some semblance of order in our lives, let’s remain vigilant. Let’s stay focused and keep our guards up.