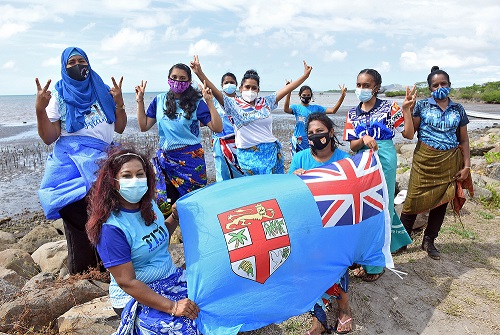 Members of the Soroptimist International Lautoka branch pose for a photo with the Fiji Flag to mark the Fiji Day celebration along the coastline at Namoli village in Lautoka. Picture: REINAL CHAND

Yesterday we celebrated our 51st anniversary of independence from Great Britain.

It was an opportunity to reflect on our journey as a nation, where we started from and where we are headed.

There are moments in time that will no doubt draw our attention.

From the hype built up to October 9, 1970, the eve of Independence Day, to now, we have certainly come a long way.

We have seen changes over the years.

Many have been positive changes that raised the standards of living in our nation.

We have been greatly impacted by natural disasters along the way, not that it has just come out of the woodworks so to speak.

The impact of the Category 5 mega-storm was evident everywhere along the path of the cyclone, along the upper edges of Viti Levu, the bottom half of Vanua Levu, Taveuni, the Lomaiviti Group, Yasawas and Eastern Lau.

Some villages were wiped off, and some were missing homes.

Twenty-one days after Winston swept through Fiji, we finally got confirmation of another death, pushing up the number of people who succumbed to the wrath of this mega-storm to 44.

It was reportedly the most intense tropical cyclone in the Southern Hemisphere on record.

It was also reportedly the strongest to make landfall in the Southern Hemisphere, and the most intense tropical cyclone worldwide in 2016.

STC Winston was reported as the costliest tropical cyclone on record in the South Pacific basin.

When you go through the messages of most of our leaders for Fiji Day, one thing is common.

It’s the call for us all to reflect on the importance of the day, and unite for the betterment of our nation.

There is hope that we can unite and push for better days ahead.

Right now as we face the COVID-19 pandemic, we cannot escape the fact that thousands of people have lost their jobs.

As of Saturday, October 9, there have been 653 deaths due to COVID-19 in Fiji, with 651 of these deaths during the second wave that started in April.

Again, it is a reflection of just how we responded to the second wave.

Our death toll is quite high, and we can only hope lessons have been learnt from this very sad turn of events.

It’s certainly not a pleasant scenario.

As we go through the processes outlined by our government to set the base for what it hopes will be a return to some semblance of normality, we are buoyed by one thing.

We are resilient people!

It shows in how we respond to major events.

For instance STC Winston inched out this emotional reaction from around the world.

Fijians around the country responded immediately in the wake of the disaster.

In the face of the pandemic, Fijians gave whatever they could to assist their fellow Fijian.

This all came from the heart.

It was a very powerful reflection of the calibre of people we are, and how we come together to give, to prop up others.

This is what it is all about for many Fijians.

So on this day, in the wake of Fiji Day, we hope this spirit of giving, and unity will stand up once again and come to the forefront.

Let us reflect on our nation’s journey together.

Let’s embrace the need to assist our nation develop positively.

Let us believe in doing good for one another, and for our country.

Let us believe it when we say we are proud Fijians.