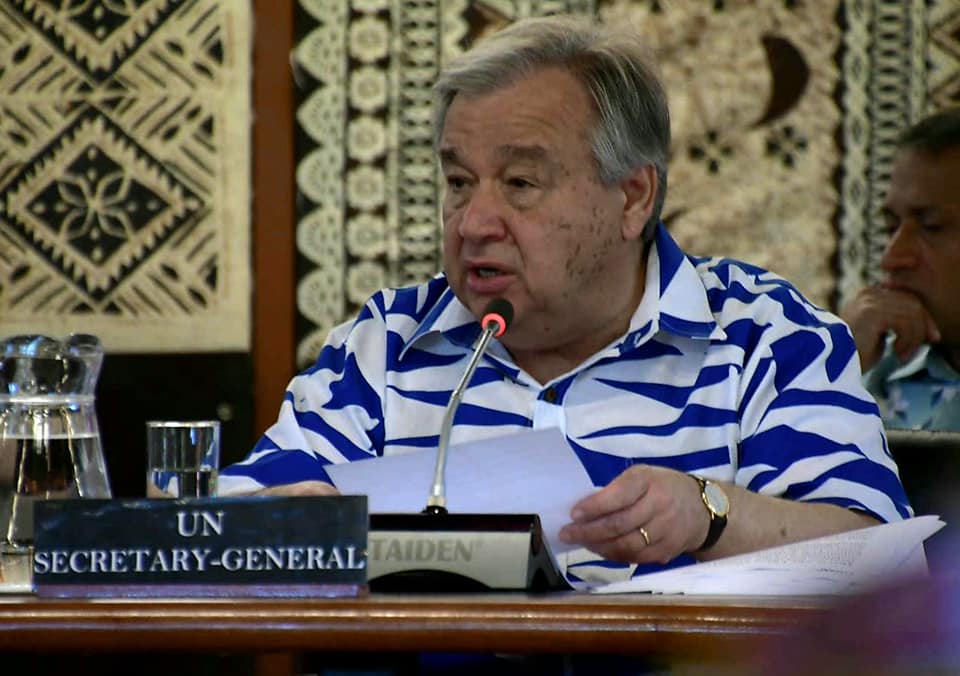 UNITED Nations Secretary-General Antonio Guterres has called for a shift of taxes from salaries to carbon, to stop subsidising fossil fuels and to stop building new coal plants by 2020.

He made the call when addressing Pacific leaders at the Pacific Islands Forum in Suva yesterday. Mr Guterres is on his first official visit to the Pacific.

Yesterday, My Guterres pleaded with leaders to stop taxing people, but instead tax pollution.

The world, he warned, could not have an increase in temperature at the end of the century above 1.5 degrees.

He said the world needed to accept that there was a need to achieve zero emissions in 2050.

He said this was achievable, but it required transformational action.

It fell back on his key point, of nations shifting taxes from salaries to carbon.

“I’ve been saying that subsidies to fossil fuel need to end,” he said.

“It’s not acceptable that taxpayers money is spent subsidising fossil fuels to make the oceans rise, to spread storms, to increase droughts in several areas of the world, to make glaciers melt.

“We need to make sure to tax pollution, not people and that we do not subsidise what’s destroying the environment.”

The UN top man believes it is possible to achieve these goals.

It would, however, need decisions, political will and transformational policies “to allow us all to be able to still live in peace with our own planet”.

It was encouraging to note his call for Pacific leaders to be actively engaged.

The continued leadership of the Pacific region, he said, would be critical.

It was encouraging also to note his willingness to engage regional leaders, looking at them to “remain crucial in global negotiations”.

He spoke about experiences he felt underscored the urgency of the global threat.

The Pacific, he said, has a unique moral authority to speak out and urged the world to listen.

His speech was a powerful reminder of our predicament.

It also is a powerful warning for the rest of the world, to sit up and embrace the harsh reality that Pacific Islands continue to live with.

The UN Secretry-General is a symbol of the UN’s ideals, and stands out as a spokesman for the interests of the world’s peoples, in particular the poor and vulnerable among them.

Mr Guterres, from Portgual, is the ninth occupant of the post, taking office in 2017.

According to the UN website, the Charter describes the Secretary-General as “chief administrative officer” of the organisation, who shall act in that capacity and perform “such other functions as are entrusted” to him or her by the Security Council, General Assembly, Economic and Social Council and other United Nations organs.

The Charter also empowers the Secretary-General to “bring to the attention of the Security Council any matter which in his opinion may threaten the maintenance of international peace and security”.

These guidelines both define the powers of the office and grant it considerable scope for action.

The Secretary-General would fail if he did not take careful account of the concerns of Member States, but he must also uphold the values and moral authority of the United Nations, and speak and act for peace, even at the risk, from time to time, of challenging or disagreeing with those same Member States.

We welcome Mr Guterres to our country and hope we all can be active participants in bringing about better awareness of the realities of life in our region, and the impact of changes that we are seeing around us.