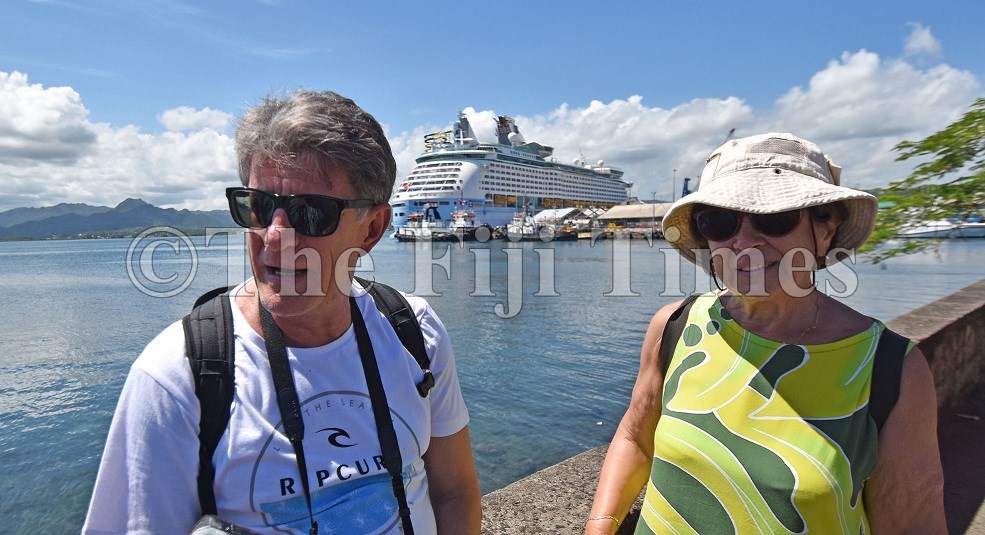 The tourists Mr and Mrs Otto Gecseb of Hungary from the cruise ship Voyager of the Seas in Suva yesterday. Picture: RAMA

There were contrasts as the coronavirus continued to infect people around the world.

Leading researchers warned it could infect billions of people if it’s not contained soon.

The World Health Organization began a two-day summit in Geneva yesterday to fast-track tests, drugs and vaccines to help slow the outbreak of the virus which, by yesterday, had infected 44,653 people around the world.

More than 300 scientists were expected to dial in remotely to the conference.

In its situation report on Tuesday, the WHO confirmed no new countries reported cases of the 2019-nCoV in the past 24 hours.

It stated an advanced team was now in Beijing to prepare an international mission and to determine the questions the international team will want to learn more about: from characteristics of the virus to public health response China put in place to try to contain the virus.

Reuters reported that the epidemic has been described by the WHO director-general Tedros Adhanom Ghebreyesus as an “emergency for China” but also “one that holds a very grave threat for the rest of the world”.

It suggested that China had also reported its lowest number of new coronavirus cases since late January, lending credence to a prediction from the country’s senior medical adviser that the outbreak could be over by April.

China’s foremost medical adviser on the outbreak, Zhong Nanshan, according to the Reuters’ report, was quoted saying the number of new cases were falling in some provinces and forecast the epidemic would peak this month.

On the home front here in Fiji, a Hungarian passenger on the cruise ship Voyager of the Seas, which berthed in Suva on Tuesday, said no coronavirus screenings were conducted when they disembarked at the Kings Wharf.

Otto Gecser and his wife were among the hundreds of tourists who visited the Capital City.

They had started their journey in Sydney, Australia before travelling to New Zealand and then Fiji, bypassing Vanuatu and other Pacific Islands which refused to receive the vessel.

Mr Gecser, however, confirmed stringent measures had been imposed onboard the vessel where passengers were constantly reminded to use hand sanitisers.

The Ministry of Health’s head of health protection Dr Aalisha Sahukhan said the ministry had an established process for cruise ships that came in.

“So the first port that they make entry into — and for this ship it was Lautoka Port — there’s a declaration made by the ship and it is boarded by our health team who go about and do the necessary checks and everything that goes into that process,” she said.

“But once that ship has left the first port, they are not checked again at the second port because they are deemed to have entered the country at one port, just like someone who comes into an international airport, that’s the first place they get checked.”

In the face of that sat the refusal by Tonga to allow four cruise ships to enter its waters.

The order to refuse entry came from its acting director of health Reynald ‘Ofanoa.

Again, we will look to the powers that be to make the right calls for us.

The powers that be have a duty to make calls that will protect us from this global outbreak.