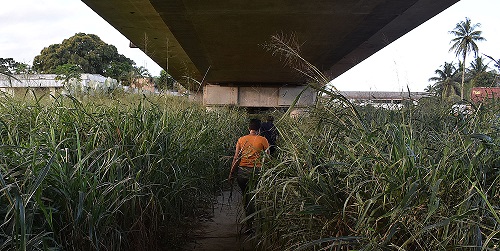 The EU funded Rewa Bridge, Nausori, the hotspot for alcohol consumption, glue sniffing and drug use by youths at night. Picture: ATU RASEA

The revelation that some members of the Nausori Chamber of Commerce (NCC) claim they have raised the glue sniffing issue with relevant authorities is interesting.

Executive member Ishad Ali said they had suggested some form of control be placed on the sale of glue.

“We had raised this issue during our meetings with the Commissioner Central but it has stayed there,” Mr Ali claimed.

He said it was sold in timber and hardware shops, and in some smaller shops as well and was readily available.

A Nausori resident who spoke on the condition of anonymity, believes the increase in rural-urban migration had contributed to the issue.

He questioned why many youths were coming to town, and suggested it was an area that attention must be focused on.

“What is happening in the traditional and cultural level.”

The resident claimed selling glue “has become a profitable thing” and many small shops were trading in it.

“It’s cheap and there is no monitoring of its sale, so anyone can buy it.”

In the face of that, we are reminded about something renowned psychotherapist Selina Kuruleca said the other day.

Home, she said, was a child’s first classroom and parents were their first teachers.

She made the comment after a concerned mother of two shared a post on her social media page claiming her family came across a man who was assaulted and injured by some school students in a bus.

The mother claimed the students had been consuming drugs and screaming obscenities in the bus, and when confronted, they allegedly attacked the man.

“Parents and guardians must come down hard on their kids and if you can’t manage your children, ask for help and be ready to follow through with it,” Ms Kuruleca said.

She said such behaviour stems from “no discipline, no supervision, mirroring behaviour that they see by adults in their families and their communities; influence of social media, peer pressure; poor decision making”.

“Don’t be a bully or give in to peer pressure … walk away.”

That is advice we must embrace. In saying that, we, as parents and guardians have a duty to make informed decisions.

We have a role to play in the nurturing of our children. We must be vigilant when it comes to understanding our children, and make decisions that will empower them, and assist them to make well informed decisions on their own.

Our challenge is to engage our children, and be a crucial part of their development. We must lead by example!