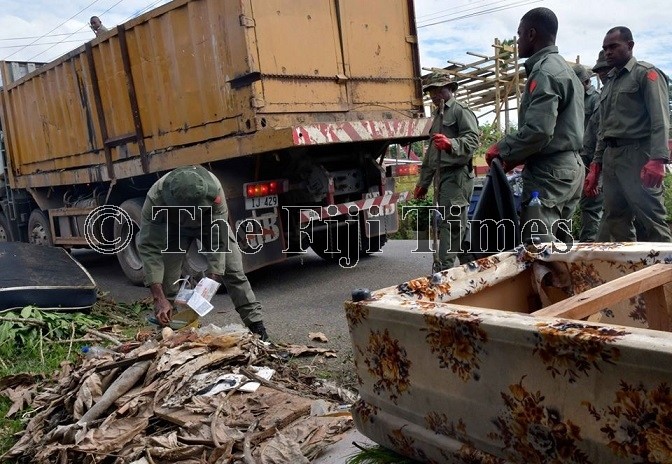 THE revelation that more than 10 leptospirosis and dengue cases were recorded in Nadi recently should make us all sit up and take notice.

This sparked a 14-day clean-up campaign by villagers and government officials.

Mr Vereivalu said government officials had been working closely with community members to prevent any further spread of the diseases.

“We had six cases reported in Nagado and about three or four cases in Korovuto,” he said.

“Another red zone is Nawaka which is a very populated area. So what we have done with the Ministry of Health is talk to residents and villagers about the clean-up campaign that is currently underway.”

The clean-up campaign began last month. He revealed plans to organise meetings with village elders and villagers to raise awareness on why they need to keep their areas clean.

“We will start with the villages where the cases were reported and then move to other neighbouring communities.”

One of their biggest concerns, he said, was the villagers’ attitude towards basic health and sanitary procedures.

Interestingly, he said, while some communities were following the COVID-19 restrictions, they were not following other important health measures “like making sure their yards were clean”.

“Apart from COVID-19, we still have to make sure that we prevent any other diseases from arising.”

Last month, we were informed of cases of leptospirosis, dengue fever and typhoid by the Health Ministry after Tropical Cyclone Harold.

This report should raise interest on the fact that we do not only have COVID-19 to contend with.

It is clear what we must do moving forward. In fact it is in our best interest to promote good hygiene.

This may sound like a broken record, but also wash your hands often with soap and water.

Use a hand sanitiser if you can. Sneeze or cough into your elbow or into a tissue and dispose this safely immediately.

Make sure you also keep your back yard clean.

Collect and dispose empty cans and other potential breeding places for mosquitoes.

Cut the grass in your back yard, and clean drains. Let’s be vigilant and proactive.