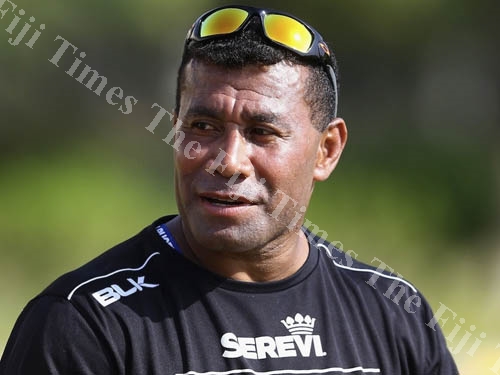 Former Fiji 7s captain and coach Waisale Serevi was inducted into the Fiji Sports Hall of Fame in 2005. Picture: FILE

RUGBY 7s legend Waisale Serevi once spoke about rugby as a career.

It was well before the shift in financial fortunes of classy rugby players from Fiji.

He spoke about talent, aspiring rugby players from Fiji, and financial returns.

He spoke about the benefits of belief in talent, natural talent, flair, exposure and return on investment.

Not everyone would grow up to be a pilot, a doctor, policeman, soldier, or hold a key position in the civil service for instance.

Rugby could be an avenue for a financial return of sorts. It could be a lucrative investment.

The man from Qarani in Gau went on to make a name for himself in the abbreviated version of rugby, travelling the world and playing in countries he never dreamt of visiting in his childhood.

He had turned his fortunes around.

He fell back on his sporting talent to earn a living for himself and his loved ones.

Now living in the United States of America, Serevi is reaping the rewards of a pathway that started in rugby, from a strapping youth playing for Rewa, and onto his stint with the national 7s side, earning many accolades, victories and milestones along the way.

This morning, another youngster Eroni Mawi travels to the United Kingdom, to link up with European Rugby Champions Cup holders Saracens.

His big break will see him playing alongside England’s rugby stars Owen Farrell, Mako and Billy Vunipola, Maro Itoje and a host of international players with the Sarries.

It is the stuff of dreams. A once in a lifetime opportunity!

The Flying Fijians loose-head prop has secured a lucrative two-year contract with the champion club.

He was farewelled yesterday by his family.

Much like most Fijian players plying their trade in top rugby clubs around the world, Mawi has come through the ranks, from junior grade through to the Flying Fijians.

Yesterday he acknowledged his support base, highlighting family backing as part of his inspiration.

As this youngster prepares to join one of the world’s top flight competitions, there is no doubt about the impact it will have on his career and personal development as a player.

His biggest challenge now, much the same as every other player in the top level competitions of the world, is how to factor in this major step up into his future planning.

This is when financial literacy will come in.

It is a critical element of the development and nurturing of our young players.

They stand out as important factors in our economic landscape via remittances annually.

Many of our top players earn big bucks playing some of the best rugby of their lives in these top club competitions.

They stand out as people our youngsters will look up to, and aspire to emulate in the future.

They are testimony of the adage that hard work will reap rewards.

Our challenge now, as we look to a future where more of our young players will attract the eyes of international scouts, is to prepare them well.

That means covering issues such as investment, return on investment, potential financial opportunities, and the importance of protecting assets, in this case, themselves.

It means focusing on key areas such as training, dieting, mental and physical preparation, and everything else that is linked to output on the field weekly.

It will mean dealing with stress on the body and work on maintaining peak performance consistently.

It will mean understanding injuries and how to cope and manage them.

There is a whole new platform for awareness.

We wish all our players plying their trade abroad, and those aspiring to do so, all the best in their endeavours.