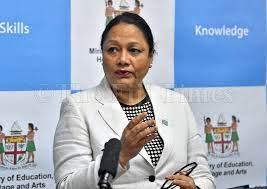 We have a story about a mother of two who says she is scared to allow her children to board their school bus to Suva City after witnessing school students assault an adult in a bus on Wednesday.

She claims about 15 students assaulted a man in his late 30s after he advised them to behave in a bus, which was returning to the Suva bus terminal.

She claimed there were students from two Suva-based schools involved and while some were in their school uniform, others were in their ordinary clothes.

The man was seen, allegedly bleeding from the forehead, after getting off the bus.

He didn’t want to give his statement to Police or to go to the hospital.

She said the man claimed that the students were sniffing glue and smoking marijuana in the bus.

Fiji Police spokeswoman Ana Naisoro confirmed the information about the alleged assault was received from a concerned member of the public and that they would be looking into the claims made.

She said there was no official complaint lodged by the alleged victim, however, the Chief Operations Officer ACP Abdul Khan has directed the matter to be looked into.

Meanwhile, psychotherapist Selina Kuruleca has called on parents and guardians to “be the adult and do the parenting”.

Reacting to a recent incident where students were found displaying unruly behaviour in public, she said there was zero tolerance for corporal punishment.

There was a need for parents and guardians to find other alternatives of disciplining their children.

“Maybe we should consider some community service, scrub the toilets in the bus stand, picking up rubbish in public places, spend some time in some of our state owned facilities cleaning up toilets, bathrooms, cutting grass, serving food and the like,” she suggested.

The fact that students were getting involved in such acts, she pointed out, reflected a breakdown in our social and moral fabric.

Whatever your take is on student behaviour, the claims by the concerned mother is a worry.

It will no doubt raise the issue of accountability and whether we as parents and guardians are doing enough to nurture our children well.

We wonder whether we are on the right track, and whether there is a need to ensure our children understand and appreciate the need for respect generally.

We can only hope this isn’t a sign of a fragmented society, and that we are able to inculcate in our youngsters good lessons that will carry them well into the future.

It was encouraging to note the Education Ministry seeking support from stakeholders to resolve the issue of students resorting to violence in public places.

Education Minister Premila Kumar said they have counseling sessions in schools but also need support from the communities.

We obviously have our work cut out!