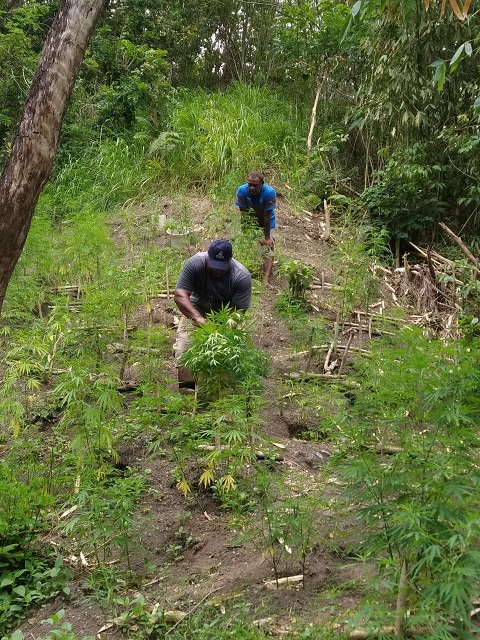 NOW that the Fiji Police Force has reiterated a warning to those found with drugs that they will face the full brunt of the law, we hope it will aid in the fight against this illicit trade.

Divisional police commander West Senior Superintendent of Police (SSP) Surend Sami confirmed two people were arrested in Nadi after they were found in possession of white substances believed to be illicit drugs.

SSP Sami said the two were in police custody at the Namaka Police Station after they were stopped at a checkpoint in Namaka on Monday night and their vehicle was searched.

SSP Sami said the police K-9 Unit was also at the scene and assisted the roadblock team to locate the drugs hidden inside the vehicle.

In a separate incident, more than 600 plants believed to be marijuana were uprooted from a farm in Navosa.

Police conducted a raid at Vatubalavu following a tip-off.

In February last year, more than 2000 plants believed to be marijuana were uprooted by police on Kadavu, raising concern.

Police placed an estimated street value of more than $3.5million on the plants which were uprooted from a number of farms on Kadavu.

The plants were uprooted from farms at four villages.

In September 2018, there was a call for laws to effectively address any alarming increase in the trafficking and production of synthetic drugs such as methamphetamine or “ice”.

That was the suggestion by Fiji Pharmaceutical Society president Reshnika Sen, who believed laws were inadequate at the time.

Ms Sen suggested they should be strengthened in line with laws in Australia and New Zealand.

Her comments came in the wake of concern expressed by Commissioner of Police Brigadier General Sitiveni Qiliho over the use of methamphetamine by teenagers.

He said although only three clandestine labs had been discovered in Fiji at the time, police needed to be smarter and more alert.

The Regional Representative of United Nations Office on Drug and Crime (UNODC) Southeast Asia and the Pacific, Jeremy Douglas, agreed stakeholders needed to work together to find ways of tackling the problem.

It is a concern that drugs such as ice are here.

It is a concern that we are not actually quite sure of how widespread it is in Fiji.

At one stage the police were actively involved in the fight against marijuana and its widespread impact on farmers and buyers.

Now we have to factor in hard drugs.

The discovery of cocaine in a number of islands in Fiji raised further concern that we may be a launch pad for the sale of hard drugs in countries such as Australia.

Our challenge is to be alert, proactive and vigilant.

The police need our support in the campaign against the illicit drug trade.