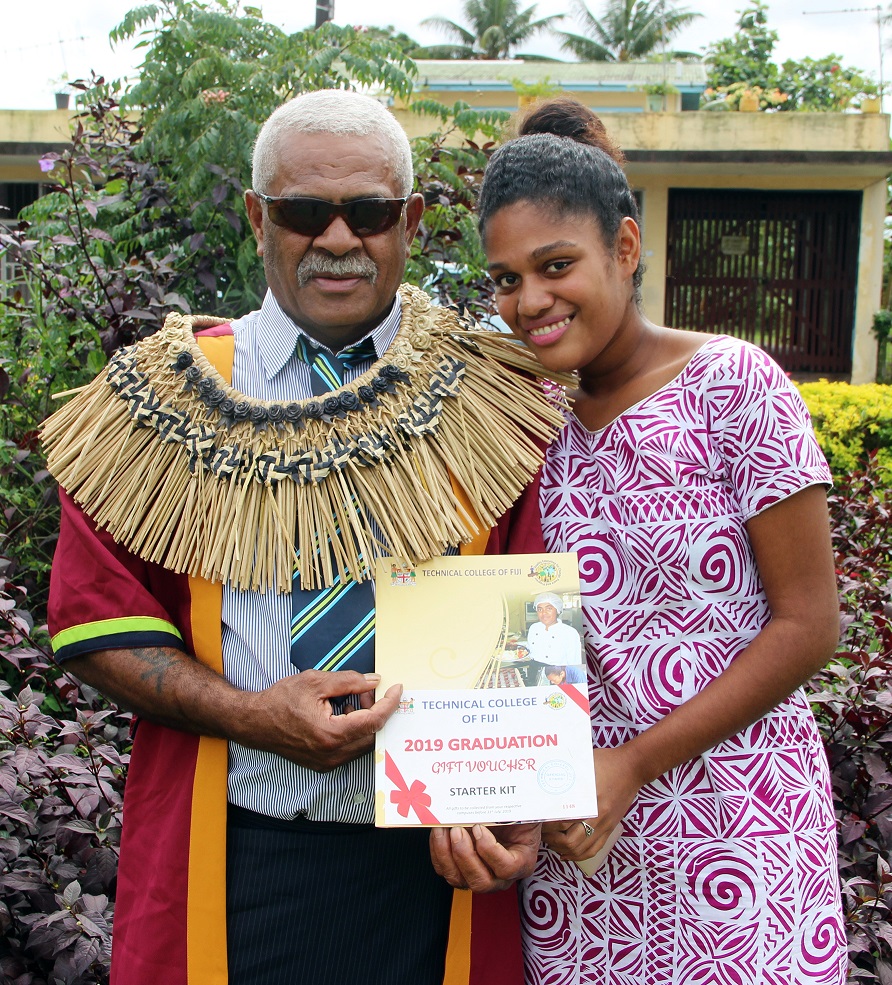 Eldest graduate at 57 years old Pita Volia beleives that anything is possible if one puts their heart to it. Picture: LUKE RAWALAI

SOMETIMES in the most unlikely places, we can find inspiration.

We just have to look though.

A little off the national retirement age of 55, this man from Naruwai, Bua, has just graduated with a Certificate in Carpentry from the Fiji Technical College’s Ratu Meli Ravoka campus in Nawaca, Bua.

At an age when the norm would suggest otherwise, people like Mr Volia are actually bucking the trend.

He dreams of opening his own construction company.

His graduation is his ticket, he says. It’s an opportunity to live his dream.

The father-of-three is a widower.

His wife died a few years ago.

He has harboured a dream to own a construction company.

The Northern Division, he reckons, lacks this.

He has visions of serving his province before branching out to the other two provinces in the division.

In fact his tale almost never started in the first place.

He was hesitant to join a recruitment drive in his village because of his age.

Now having graduated, there is an overwhelming sense of pride in the achievement.

“I am the eldest graduate at this year’s graduation,” he said.

“Now I know what I will do with my carpentry certificate and who said life cannot start at 57?”

Age is obviously no barrier for people like Mr Volia. You could ask Edwina Brocklesby as well, and she would give the thumbs up.

The Guardian had a wonderful piece about her on Sunday last week.

She is the United Kingdom’s oldest ultra-distance triathlete at 76 years old, and was awarded the British Empire Medal.

Interestingly she did not do any exercise until she was 50.

There is an amusing twist to her story as well when she tried out for the long jump team at university “for a laugh” and couldn’t move for two weeks afterwards.

Now at 76, she still manages to run five kilometres.

Sometimes we take things for granted.

People like Mr Volia could serve as motivation for us.

They are willing to buck the trend, and reach out for their goals, fred

no matter the obstacle and age.

Members of our national 7s team for instance have each gone past the platform that carried doubt, feelings of uncertainty and negative vibes to get where they want to be.

They had to challenge themselves.

They had hopes and aspirations.

They dreamed big, and worked hard to achieve their goals.

Mr Volia’s path may be different, but his willingness to live his dream is worth a story and runs a similar line.

Sometimes we just have to cast off our inhibitions, believe in ourselves, and reach out for what we feel we deserve.

The challenge is to take that first step forward.

Age should have no barriers.

Accomplishment can be quite fulfilling.