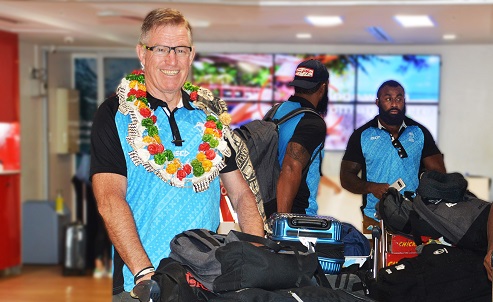 IT’S getting pretty hot at the top it seems.

The top being at the helm of the Flying Fijians team, that is.

When all things are said and done, this is going to attract a lot of attention for rugby fans.

Flying Fijians coach John McKee has been at the helm of a side that has shown great promise over the years but never really lived up to expectations … well according to the die-hard Fijian fans that is.

Our early exit at the recent Rugby World Cup in Japan didn’t go down well with fans.

In fact, it sort of reinforced the calls for McKee’s scalp.

That loss to Uruguay was like a low blow for many fans, already psyched up for big things at the RWC 2019.

We had the players.

We had experience, and we had tonnes of flair.

Unfortunately we just did not have the results that mattered in the end.

As usual, attention now shifts to the role of the coach and who will the governing Fiji Rugby Union choose to guide our team.

Under McKee, our set pieces, particularly the scrums have improved greatly.

Some fans will remember the impressive moments when our scrum held England, and later rocked the Wallabies at the 2015 RWC.

Then there was the great improvement in our final quarter challenge, once an Achilles heel of Fijian rugby.

There were those magical moments when we rocked the very powerful Georgian scrum, and later the Welsh scrum.

We held our own against the Wallabies as well in that opener.

Our defensive shape held up well at the RWC 2019, even though our kicking game faltered quite badly against Uruguay.

There will no doubt be fans who will look up to the governing body, the FRU to do the right thing and get us the much-needed exposure for our Flying Fijians, and this time against tier one nations.

We must have these tests on a regular basis.

It will not be easy, but it must be done.

The challenge is on the FRU to sort themselves out and get that done.

Otherwise, we will continue to languish where we are, even if we decide to get a new coach.

Our key players are stars for their clubs, playing top quality rugby in top competitions around the world.

Yet they are not playing tier one nations together as a team regularly.

The New Zealand All Blacks for instance, played 14 tests against tier one nations last season, in 2018, leading up to the RWC 2019.

Post-RWC 2019, the All Blacks are already scheduled to play six tests at home next year, against Wales, Scotland, Australia, Argentina and South Africa.

All their players are also stars for their clubs, playing top-level rugby on a weekly basis in the tough Super Rugby competition.

That is the harsh reality of the situation we find ourselves in.

The onus is firmly on the FRU to step up to the expectations of fans, and organise more regular competition for our Flying Fijians.

We have definitely improved in our structures around the game.

The challenge will always be on getting our top players together as a team, playing regularly against top-level opposition.

That challenge is made difficult by the fact that we are not in a position to pay our players top bucks to stay at home together.

But that’s why the FRU is there, to think of ways to get around the many shortfalls we have.

In the meantime, attention shifts to who will be our coach.

Good luck to the applicants.