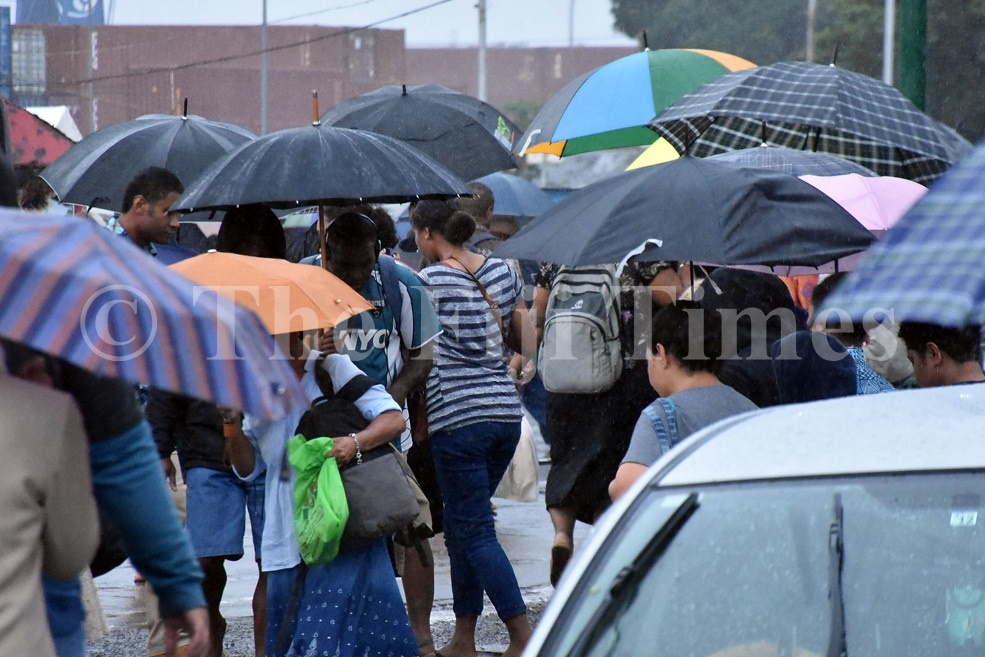 People crossing the road in the heavy rain along Rodwell Road in Suva. Picture: ELIKI NUKUTABU

Now that the Fiji Meteorological Service is forecasting more rain over the coming days, we are reminded about safety measures.

More rain, according to its director Terry Atalifo is expected for most parts of the Western Division, Bua and Macuata provinces.

He said we can expect to have rain until the weekend.

He said it was associated with TD05F an active weather system West of Vanuatu yesterday.

As it draws closer, Mr Atalifo said, active bands associated with it would affect these areas.

“We are only expecting rain during the passage of this system.”

He warned though that we should expect heavy rain, and an alert had been issued for areas closer to the system.

“We have our heavy rain alert for Yasawa and Mamanuca groups, Western and Northern Viti Levu (Nadi, Lautoka, Ba, Tavua and Rakiraki, interior of Ba and interior of Ra), Bua and Eastern Macuata provinces (in Vanua Levu).”

Strong winds can also be expected up to 30 knots with maximum winds over open waters.

Heavy rain means flooding in many areas around the country.

That should inch out safety measures.

This is when we should be vigilant and embrace water safety.

We are still inside the cyclone season.

Recent drownings around the country should also be a reminder about the importance of adhering to safety advice.

We know what must be done.

Such weather systems have not just popped out of the woodworks.

We have an annual cyclone season that runs from November to April.

In the face of this weather warning, the Fiji Police Force yesterday reiterated its call to parents to monitor their children and avoid leaving their young ones under the care of children.

This came in the wake of an incident where a five-year-old from Namotomoto Village was found motionless in a Nadi hotel in Wailoaloa on Tuesday.

The child, police said, was swimming at the hotel pool with his cousins when the alleged incident happened.

Seven people have drowned compared to two for the same period last year.

As heavy rain fell in the Capital City last night, we are reminded about what to expect, and what to do in the event of flashfloods.

So let’s be careful when out and about.

Mother Nature can be tough on life.