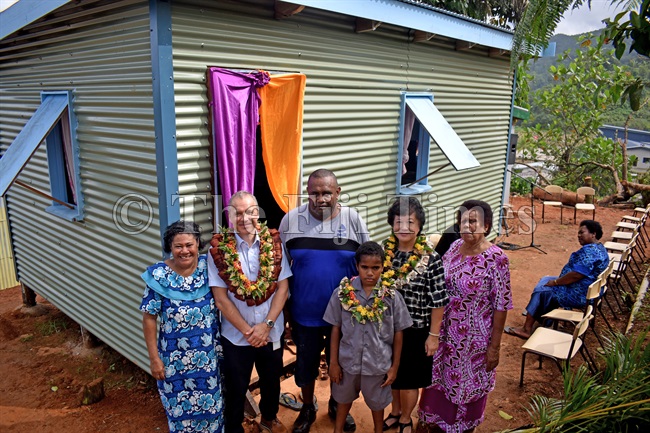 Nick Barnes (second from left) with Samuela Bainikalou and his family after they opened the doors to his new home at Kalekana Lami yesterday. Picture: JONA KONATACI

Sometimes we need a reality check to keep us grounded. We need motivation and inspiration to stay focused on life. When all seems lost, hope can reignite the desire to live life to the brim sometimes.

In the face of the troubles of the world, a family of four is now joyful, and embracing life with enthusiasm. Their troubles were tightly linked to a deteriorating home.

That is no more! Samuela Bainikalou’s family had been living in a home that was in “a very poor condition” at Kalekana Settlement outside Lami for many years.

On Monday this week, they received the keys to their newly constructed home by Habitat for Humanity Fiji.

Mr Bainikalou spoke about seeking assistance in 2018. He spoke about living in a home that deteriorated over the years.

Then there was light at the end of the tunnel! Through Habitat Fiji’s assistance, their old home was demolished, and a new one built at a cost of $30,000.

Habitat for Humanity Fiji is an NGO that works with families and communities to improve their living conditions.

A member Nick Barnes, a prominent lawyer in Suva, said $30,000 was raised for construction. In fact after Cyclone Yasa, Mr Barnes ran 100km in 10 days for sponsorship.

“Habitat for Humanity with the help of the community started building three weeks ago and now we’ve managed to complete a home for Samuela and his family. It’s a good example of what the community can do when they get together and put their minds to it.”

That, in essence is what we are talking about — community spirit and the willingness of people to unite for a worthy cause.

On March 9, 2020, the United Nations reported that on February 19, the gavel fell on the 58th session of the UN Commission for Social Development, which agreed on the text of the historical first United Nations resolution on homelessness.

A serious violation of human dignity, homelessness had become a global problem, it noted, and it was affecting people of all ages from all walks of life, in both developed and developing countries.

That was according to UN-Habitat, which, it stated, had noted an alarming rise in homelessness in the past 10 years.

Young people, it said, were the age group with the highest risk of becoming homeless.

The UN Commission’s resolution recognised that people were often pushed into homelessness by a range of diverse social and economic drivers.

Back on the homefront, we are reminded about Fijians who are in need, and those who are willing to give up valuable time and commitment to assist others. There are many lessons to learn, and appreciate! They deserve acknowledgement.