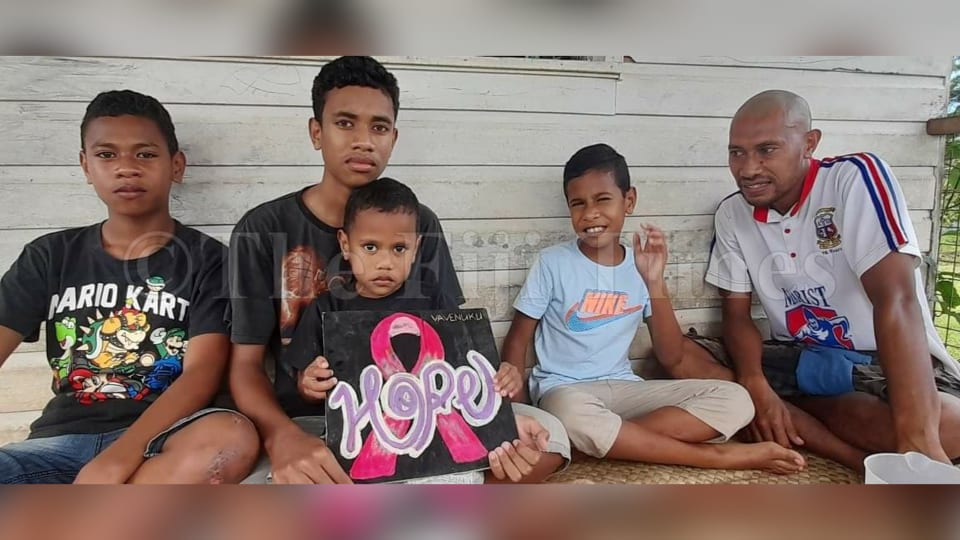 Suli Daurewa and his four sons with the Pinktober painting they gifted Selina a few years ago. Picture SERAFINA SILAITOGA

Suli Daurewa has no qualms about the importance of marriage, and how it must stand up to scrutiny in times of great challenges.

He makes no bones about why it is important that couples place value on their relationship and nurture this.

As we remember all those impacted by breast cancer this month, we hope his story will serve as inspiration for many people out there.

Pinktober, a campaign ear-marked for October annually, is important for many reasons.

Mr Daurewa has shaved off his hair to remember his wife Selina whom he lost 10 months ago to breast cancer.

His story, in yesterday’s newspaper takes us on a journey of discovery. It takes us on a route that raises the importance of family support.

The father of five has had to take on the role of both mum and dad for his children.

Losing his wife was one of the most painful experiences he encountered in his life, he said.

“My wife was diagnosed with breast cancer in 2016 and we lost her in December last year because her condition deteriorated very fast,” he said.

“A few days ago, I shaved off my hair to remember her because of this Pinktober month and we miss her dearly. Even when she was still alive, every time she shaved her hair because of chemo treatment, I’d also shave my hair off to support her.”

The couple were in Lautoka in 2016 when Selina discovered lumps in her left breast and had it medically examined.

At that stage, Mr Daurewa said doctors had advised her to remove it because it was early stages but wrong advice to use herbal treatment influenced her to change her mind.

“She never endured pain in the early stages until 2018 when her right thigh was in pain and she couldn’t walk,” he said.

“We were in Suva and when I took her to the hospital, they wanted to remove her breast right away because they discovered more cancer cells.

“We made arrangements for the first surgery but she was influenced by wrong advice, telling her to go for herbal instead of going through a surgery. So she cancelled the surgery and she went for herbal.”

Her condition got worse and she finally gave in to surgery.

“By this time I was furious because we could have done the surgery a few years earlier but she opted for herbal,” he said.

“My wife went through so much but she never lost hope. She kept praying and I kept supporting and loving her. But one thing I want to plead with families and especially husbands to always support and love their wives and loved ones who may be suffering from cancer.

“One thing I found out being involved with the Fiji Cancer Society was that some husbands leave their wives when they are diagnosed with cancer and it’s sad because family support is important.

“Our marriage is a promise of a life-time to God and we must remember this because it’s in good and bad times. We need to kill that manly ego and stand by our wives.”

Given the high incidence and destructive nature of breast cancer, early prevention and treatment of this disease is a high priority.

The message of Pinktober is an important part of this month. There are many people behind the scenes.

They are working hard to ease the suffering of patients, and reassuring them and providing comfort for those who are in palliative care.

We remember them all as we go through the month of October.