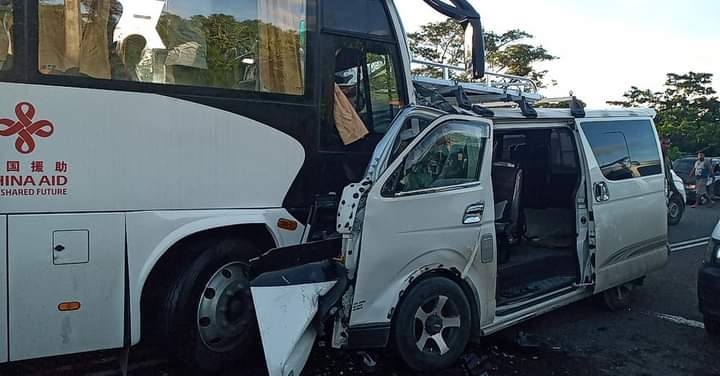 The scene of the accident at Olosara, Sigatoka that claimed the life a man. Picture: SUPPLIED/FACEBOOK

A man died on Sunday afternoon after the mini-van he was driving collided with a Republic of Fiji Military Forces bus at Olosara in Sigatoka.

Police said the victim allegedly lost control of the van, causing it to veer on to the opposite lane, resulting in the accident.

Police spokeswoman Ana Naisoro was quoted saying the victim died at the scene and the military officers were rushed to the Sigatoka Hospital for treatment.

Earlier last month, on November 10, we raised the issue of road accidents as we head into the festive season.

This followed the death of a two-year-old boy after he was crushed under a vehicle in an accident at Drasa in Lautoka.

The little boy was a passenger in a car that went off the road after an alleged collision with another vehicle.

It is clear that most accidents happen because we allow them to.

We must keep reminding ourselves about the fact that road deaths leave behind much more than just pain and suffering.

They have an impact on lost productivity and there is a cost attached as well to the attendance of emergency services, and to the post-accident care for survivors.

Police records list a number of factors that cause accidents.

They range from speeding, to inconsiderate driving.

Speeding has always ranked high as a major cause of road accidents in Fiji. It’s followed by careless driving and the fact that pedestrians have also been at fault.

There have also been accidents caused by driver fatigue, dangerous driving, drink driving, and hit and run accidents.

We are contributing to road accidents!

We are speeding, driving carelessly, and not adhering to road safety tips when we walk on the side of the road. Sometimes we do not have enough rest before we start a journey.

We drive dangerously and we still take the wheel when we are drunk.

We raise this issue again, that in February this year, in Stockholm, Sweden, the World Health Organization stated road traffic injuries were the leading cause of death for children and young adults aged 5-29 years.

In a report on UN News, WHO director-general Tedros Adhanom Ghebreyesus said the millions of lives lost every year due to road traffic collisions was an outrage.

“It is an unacceptable price to pay for mobility,” he said.

Most road traffic deaths and injuries could be prevented using tried and tested strategies, he insisted. Road traffic accidents took some 1.35 million lives annually and cost most countries three per cent of their gross domestic product.

On the home front, awareness campaigns are organised, talks and workshops tell us about road accidents and how to prevent them.

There are road safety tips given out and discussions on why these tips are important.

Yet every year, we continue to have accidents that either cost us a life, or serious injury.

Road safety must matter. It must be part of our daily lives, and it must have a place in our hearts and minds.