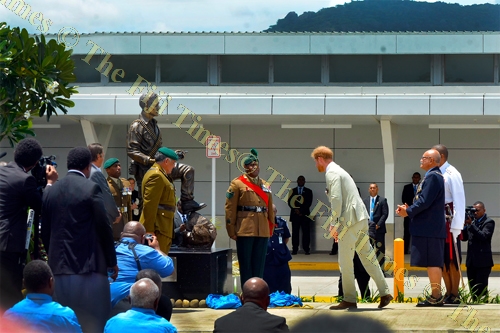 He was still a little boy, nearing five years old when his father left on a tour of duty in 1971.
Sergeant Talaiasi Labalaba was a soldier. Isaia, 53, remembers him as a family man.

At that young age, he obviously wouldn’t have known that his father was a member of Britain’s elite Special Air Service.

The SAS is arguably the longest active special unit in the world. Only the best will make it through to this unit.

To ensure this standard is maintained, the SAS holds one of the toughest selection and training programs in the world.

Selection comprises of multiple phases that are actually designed to break down candidates and stretch those who survive to their limits.

Business Insider recently revealed the program has an astonishing 90 per cent fail rate, with many candidates dropping out because of stress or injury.

Candidates have also died attempting to pass the program.

It isn’t easy to get into the shadowy world in which the SAS operates. By the end of selection, it said, an initial batch of around 200 candidates would have been reduced to 25 or so.

They represent the finest the British armed forces can offer.

That’s when they are awarded the beige berets and the SAS badge with the winged dagger.

Not many young people in Fiji today will know about the bravery of Sgt Labalaba during a “secret war” the British were engaged in, in Oman.

His bravery was little known to the public for many decades.

Sgt Labalaba and eight fellow SAS soldiers were stationed at an army training house outside the port of Mirbat in Oman when they came under attack on the morning of July 19, 1972.

Caged in by the attackers, Sgt Labalaba, in a daring moment, sprinted across an exposed 800 yard stretch to reach a 25-pound field gun.

He came under heavy fire and suffered a bullet wound to the jaw.

But ignoring his wounds, he turned the weapon on the 250 attacking insurgents and opened fire from close range, holding them off, just long enough to allow reinforcements to arrive before he died.

Fellow SAS Fijian Sekonaia Takavesi, who was part of yesterday’s unveiling of a statue of Sgt Labalaba by Prince Harry in Nadi, also ran the 800 yards to try and save Sgt Labalaba’s life that morning in 1972.

Sgt Labalaba was posthumously awarded a Mention in Dispatches for his bravery and is buried at St Martin’s Church in Hereford, where the SAS are based.

A statue of him stands at the SAS headquarters. Yesterday the President Jioji Konrote said Fiji honoured his family and his village as well as the memory of all Fijians who had served in the armed forces over the decades in war and peacetime.

Over the years, veterans of the SAS had joined the push to award Sgt Labalaba the Victoria Cross.

He displayed bravery under intense conditions. He stood up for something he believed in, stood by his mates, and made the ultimate sacrifice.

He was a true warrior.