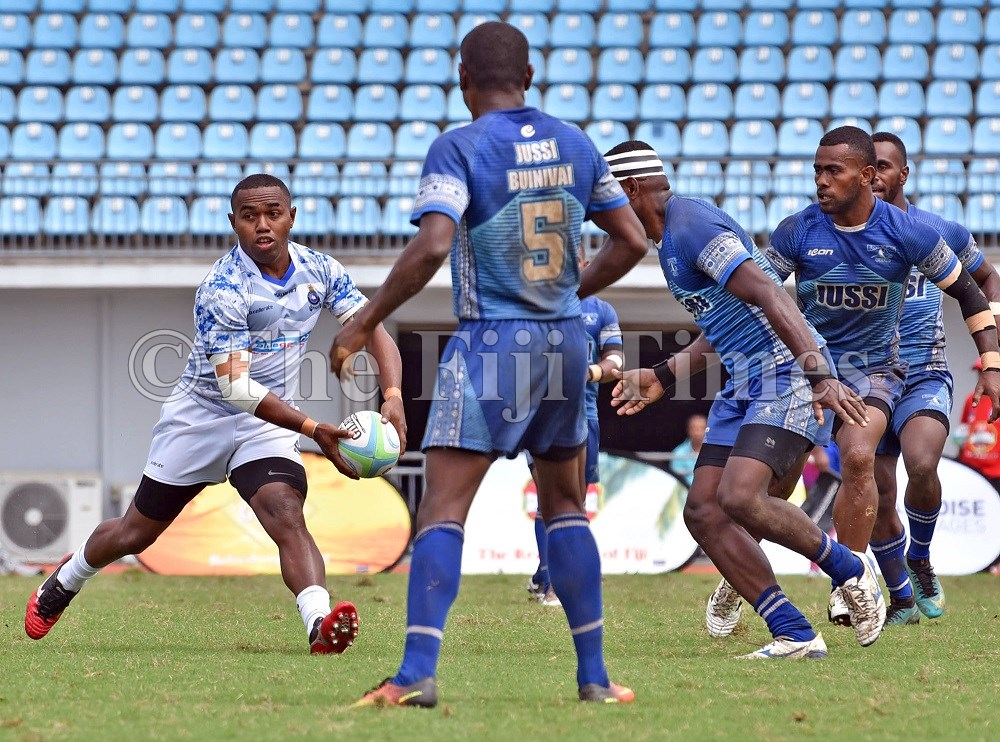 Waisea Nacuqu on attack for Police White against Jussi Buinivai during Day 2 of the 44th Fiji Bitter Marist 7s tournament at the ANZ Stadium in Suva on Friday, September 24, 2020. Picture: JONACANI LALAKOBAU

The hype is building up at the annual Marist 7s rugby tournament in Suva.

Every year the cream of the crop of our 7s pool converge at the national stadium to compete for top honours.

Every year, there are surprises, and there are rookies who turn heads.

It’s all part of what is arguably the biggest and oldest 7s tournament in the region.

When all things are said and done, the hype built up by the large following the event attracts, ensures there is continuity and interest focused on it annually.

In the face of that sits the revelation by the national coach Gareth Baber that he is on the lookout for quality players.

That just adds to the interest already generated. It should raise the stakes for all teams involved today.

It was good to see the likes of former national forward Pio Tuwai back in action after a long layoff from the domestic scene.

Yesterday he was back in top form for his Barbarian Brothers side, strutting his stuff alongside national playmaker Jerry Tuwai.

Interestingly, Baber reckons we are in a good position leading up to the Olympic Games next year in Tokyo, Japan.

With borders closed, and most teams unable to compete in top level competitions, Fiji is in an interesting position. Our top players are engaged in top level games.

“With the quality of players that are here in Fiji, this could be the start of something that gives us an extra boost going into an Olympics year,” Baber said.

“With the Marist 7s, I get to see not only players that I have had my eyes on in the past few months, but I get to see all the rest of that talent that is here in Fiji.”

Baber said he was excited about the return of Fiji’s number one sport and seeing it back in action.

“More than anything I am excited we have got 7s rugby back on, we see it as a real opportunity and something other countries won’t be able to do is have their players playing regularly in 7s tournaments and getting into that rhythm of 7s and fighting against the best, and the rest of the world will look at us with jealousy.”

It does raise an interesting point and places us at an advantage.

The key now is to consolidate our strengths, and work towards developing this part of our preparation.

That means getting a team together and nurturing combinations early.

On the flip side though, the fact is that we are in containment mode in as far as the COVID-19 pandemic is concerned. Our challenge is to keep the status quo.

Enjoying 7s rugby is just one of the advantages of the status we are in.

The key is ensuring things stay that way though.

So let’s not touch our faces when out in public.

Let’s wash our hands often with soap and water, or use a hand sanitiser if we have one.

Sneeze into your elbow or into a tissue and dispose this thoughtfully.

On the field today, we wish all the teams the very best.