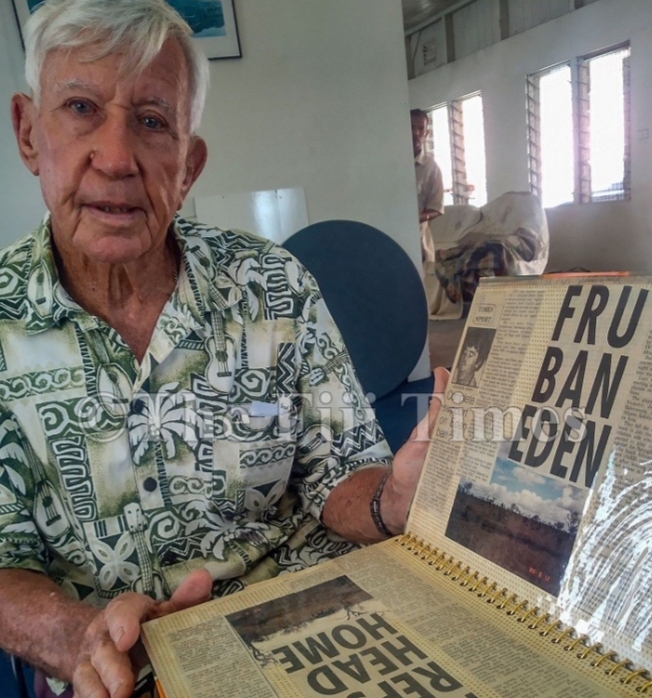 At retirement, that unmistakable voice can still be recognised even without seeing him.

He started from humble beginning and became one of the best in the trade. Perhaps the best to date locally.

He came from New Zealand where rugby is said to be a religion. He was a teacher. And he was among those who helped shape the Fijian sports landscape to what it is today.

Sixty years is more than half a century. A long journey indeed for a sports person, but for Eden, he cherished those years.

They were not smooth. There were occasions when he stepped on other people’s toes.

There were times when he was reprimanded for what he loved doing.

That is to relate sports commentaries back into our homes through radio and television.

Eden was recognised last year for his contribution to the country with a commemorative medal from President Jioji Konrote.

Today he still cherished the 60 years of commentating sports.

He also commentated on boxing matches, athletics, but his favourites were cricket and rugby.

At retirement, and as he strolls through Suva City streets or any part of Fiji, Fijians still stop the ‘Voice of Rugby’ for a handshake and at least a chat to hear that popular voice again.

Meeting fans “I get embarrassed sometimes at the sort of comments I get from members of the public.

Until now when I walk down the streets in town, I get stopped repeatedly and get handshakes and thank you from people.

You never know the feeling when you face those situations when people stop you on the road and on the streets to thank you. It’s a wonderful feeling to know that you are recognised for what you do to help others.

“As I walk past, I can here whispers as people recognise you. I can hear ‘That’s Graham Eden.’

“That’s the beauty of Fijian people. You are loving and caring and to be able to contribute in your development through the things I do, for me I find satisfaction in helping them through my commentaries.

It is a wonderful feeling to know that you help people. I will forever cherish that.

“When doing broadcasting, it gives me a feeling of enjoyment that people turn to listen to commentaries in those days.

In the West and other parts of the highlands, people would take a TV set or radio to the mountains or top heights to be able to watch and listen to the games in Europe or Hong Kong and listen to our commentaries.

“I did not know about that until I was told. They would build sheds to camp in the mountains, enjoy kava and listen or watch rugby. It was all about part of the excitement of those 60 years of commentary.

“I remember once we did broadcast from inside a bucket of a loader in France. The game was on a ground near a paddock. Fiji played the local side and in order to broadcast, we had to get about 200 metres of cable to the nearest residence and relayed the commentary to Fiji.

“It was cold and windy. It was across the border. They were not good with rugby, but they wanted to play our touring team. Fans at home wanted to know how we did. I returned and got a lot of praises. Those moments of seeing that I had satisfied members of the public are with me for ever,” Eden said as his face turned red and tears slowly rolled down his face.

“I can’t stop to always thank the fans. Seeing them clap, stand up in pavilions to greet me, offer their reactions about teams and Fiji rugby, are something I will never forget.

“Thank you all for helping and making me believe in what I did. They were all for you.”