Ecuador to increase police manpower in Guayaquil after killings 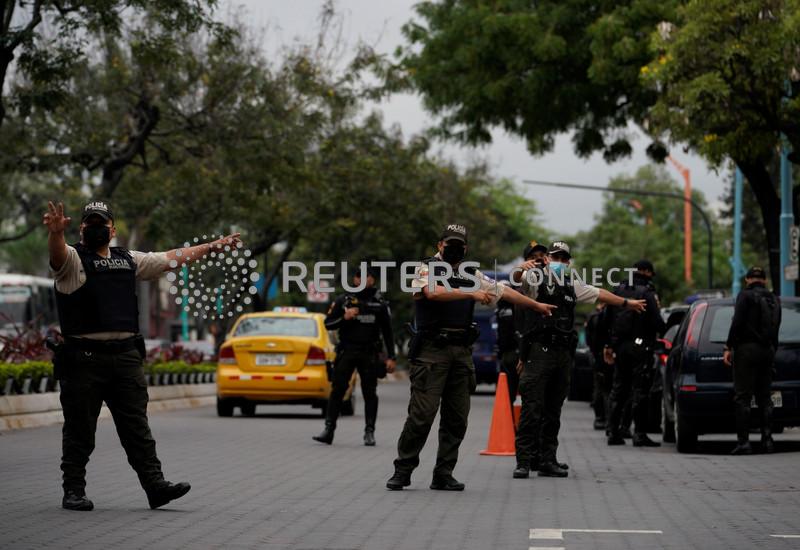 FILE PHOTO: Police officers signal to cars to stop during a search for weapons and other illegal items during an operation to curb increasing violence, at a checkpoint, in Guayaquil, Ecuador December 14, 2021. REUTERS/Santiago Arcos

QUITO (Reuters) – Ecuadorean President Guillermo Lasso said on Sunday he will send an additional 1,100 police officers to coastal Guayaquil and increase military presence there amid a spate of violent deaths the government says are connected to the fight against the drug trade.

Violence and crime, including within the prison system, soared in Ecuador late last year. The government has blamed the violence on drug gangs who use the country as a transit point for narcotics headed to the United States and Europe.

Lasso declared a state of emergency, which ended in mid-December, and deployed hundreds of soldiers in violent areas, though citizens and analysts say boots on the ground fail to confront the poverty and poor policing underlying the violence.

“These achievements have reduced the territory of the mafias where they acted without state presence,” Lasso told journalists. “Notwithstanding, those actions also have consequences like the increase in violent deaths on the streets.”

Lasso, a conservative banker who unexpectedly won the presidency last April, added, without giving further details, that he is replacing the commander of the national police and will spend $9 million on police equipment.

Lasso’s announcement came as police investigate an attack on Friday in one of Guayaquil’s working class neighborhoods which left at least five people dead and nine wounded, as well as the murder of a Dutch tourist in another part of town days earlier.

The country seized 15 tonnes of drugs in January, triple the amount confiscated in the same month last year, Lasso said, and trafficking through the port of Guayaquil has fallen nearly to zero thanks to a new police intelligence center there.

Soldiers will participate in operations within Guayaquil from Sunday, Lasso added, and reinforce the country’s borders with Colombia and Peru to prevent drugs and arms trafficking.