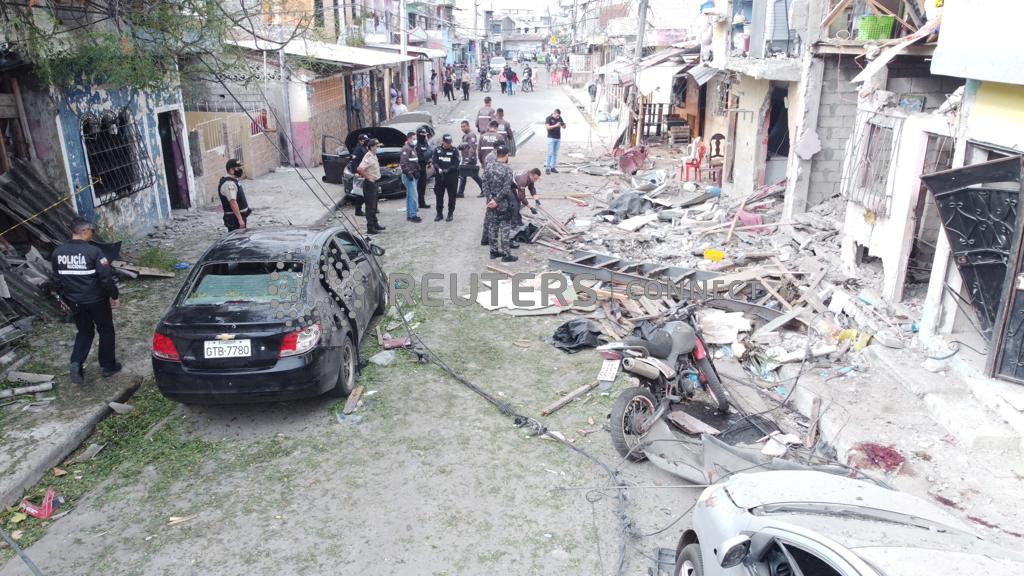 Members of the security forces check in the area of an explosion that left people injured and others dead and destroyed several houses and vehicles, according to local media reports,in southern Guayaquil, Ecuador August 14, 2022. Ecuador National Police/Handout via REUTERS

QUITO (Reuters) – The government of Ecuador has authorized security forces in Guayaquil to carry out inspections of houses as part of a new state of emergency, the interior minister said, after an explosives attack killed five people over the weekend.

The blast in the working-class neighborhood of Cristo del Consuelo early on Sunday morning has been classed as a terrorist act by authorities, who blame crime gangs. A further 17 people were injured.

The government has long said rising violence in the South American country is caused by fighting between gangs looking to control drug trafficking routes to the United States and Europe.

President Guillermo Lasso declared a state of emergency in the coastal city after the explosion, mobilizing larger numbers of security forces in a task force which will operate for 30 days.

“One of the principal measures in the decree is the suspension of the inviolability of the home, because it’s important that we gather a lot of information,” Interior Minister Patricio Carrillo told journalists in Guayaquil.

“There are various lines of investigation that we are working on,” he said. “This has to do with illegal economies.”

The decree also suspends privacy rules for mailed items and the right to public gatherings in Guayaquil and nearby Duran and Samborondon.

Since the decree 11 raids have been carried out in the city and five people have been arrested, Carrillo added.

Explosives, guns, and drugs have been seized, he said, without giving further details.

The police have said the victims of the explosion appear to have been unconnected with criminal activity and that the injured are being investigated to determine if any have connections to criminal gangs.

There have been some 145 explosive attacks registered in Ecuador this year, including 72 in Guayaquil, according to government figures.