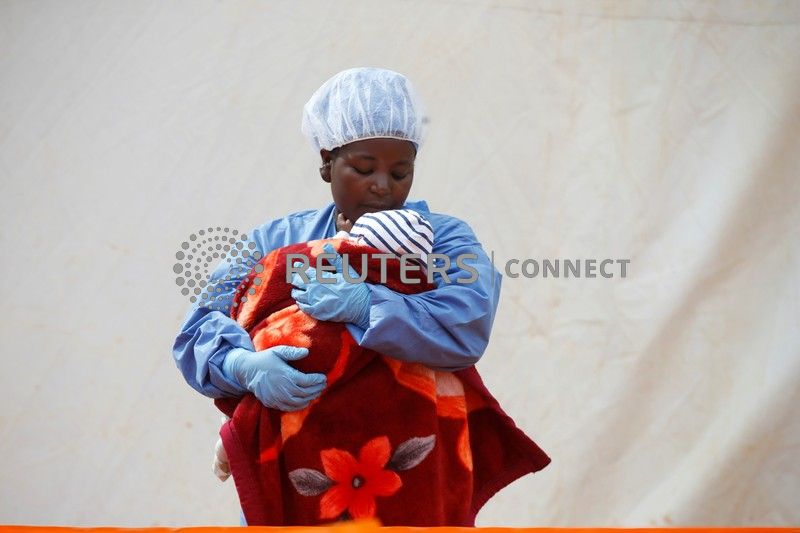 Rachel Kahindo, an Ebola survivor working as a caregiver to babies who are confirmed Ebola cases, holds an infant outside the red zone at the Ebola treatment centre in Butembo, Democratic Republic of Congo, March 25, 2019. Picture taken March 25, 2019. REUTERS/Baz Ratner

Most health care workers need a surgical mask, goggles, hooded coveralls, an apron, rubber boots and two pairs of gloves to avoid catching the virus that typically kills around half those it infects.

The outfits are hot, and in the stifling tropical temperatures of eastern Democratic Republic of Congo this limits the time they can spend with patients fighting for their lives in isolation units.

But Masika has antibodies in her system after she won her own battle against Ebola last year, and she now has immunity.

The 33-year-old mother of six can spend entire days with patients at a treatment centre in the North Kivu town of Beni, offering a comforting presence among a crowd of faceless figures with names written on their suits in marker pen.

Masika is one of dozens of survivors who are providing care – and much-needed human contact – to some of the littlest victims of the second-worst Ebola epidemic on record.

Of the more than 1,260 confirmed and probable Ebola cases, 28% are children, according to figures from the World Health Organization. More than 800 people, including at least 248 under the age of 18, have died since the outbreak began in August.

The outbreak is surpassed only by one in West Africa in 2013-16, which is believed to have killed more than 11,000 people.

Masika lost 10 relatives to the virus; four of those infected in her family survived.

“It was as if Ebola had chosen my family,” she said.

She was admitted to the same treatment centre where she now works in September and stayed there for 21 days, battling horrific symptoms.

“It’s like suffering from all the diseases of Congo at the same time,” she said. “I felt bad all over my body: headache, stomach ache, diarrhoea, vomiting, tiredness.”

Masika’s experience inspired her to join the fight against Ebola, comforting sick and frightened children who have to be isolated from their families and familiar surroundings to avoid infecting others. She is one of at least 23 former patients employed at the centre in Beni, which is run by the Alliance for International Medical Action (ALIMA).

When Reuters visited in late March, Masika was spending most of her time in a clear plastic isolation cube. She rocked and fanned Furaha, a little girl who rarely stirred or cried. The cubes allow patients to see relatives during treatment, albeit through thick plastic walls.

When the needle attached to Furaha’s intravenous drip had to be replaced, Masika gently lifted the girl and carried her to the back of the cube so a medic in full protective gear could find a new vein. Furaha slipped a skinny arm around Masika’s neck and leaned her head against the woman for support.

“My goal is to make her happy,” Masika said of her small charge, the youngest of five family members who were being treated at the centre. “I treat the child like she’s my own, so she’s at ease even while she’s away from her parents.”

A few cubes down, the body of a 2-year-old boy who had died in the night lay on a bed, his thin frame barely making a bump under the flowered sheet that had been pulled up over his face.

Children are especially vulnerable to the virus because their bodies are less able to cope with the extreme fluid loss caused by diarrhoea, vomiting, fever and bleeding, doctors say.

More than two out of every three children sickened in this outbreak have died, according to WHO figures. Others were orphaned or left on their own when their parents went into treatment.

Claudine Kitsa, 40, had to place a child in care while she was being treated for Ebola in the nearby trading hub of Butembo. She now does shifts at a childcare facility operated by the United Nations children’s agency UNICEF, taking turns with other survivors to sleep next to the babies’ cots on mosquito-netted beds.

On a recent morning, she strolled around a yard of hard-packed earth, rocking 7-month-old Christvie in her arms. Baby clothes were hung up to dry on the fence of the single-story compound, which had been freshly decorated in cartoon murals.

Christvie’s mother had recently died of Ebola, and staff were closely monitoring the baby to see if she would fall sick.

For Kitsa, volunteering at the centre is a “way of keeping love alive,” at a time when Ebola is robbing families of the ability to care for their loved ones.

Healthcare workers say people like her play an invaluable role.

“We can’t be caring for children all of the time, because you can only wear PPE (Personal Protective Equipment) for one hour at a time. And it would scare … children,” said Trish Newport, the Ebola representative for Medecins Sans Frontieres (Doctors Without Borders) in Congo’s eastern city of Goma.

“So to have survivors who can wear light protection and be with the children and bond with them, it’s huge for us. We couldn’t manage without them.”

She believes that survivors benefit from the experience as well.

“There’s a lot of stigmatisation for them in the community,” she said. But at the treatment centres, they are treated like heroes.

Survivors also serve as educators and advocates for the centres in the community.

This is Congo’s 10th Ebola outbreak, but it is the first in the densely forested volcanic hillside provinces of North Kivu and Ituri.

Many are afraid to seek help from the experts. Some believe the disease is part of a plot by foreign aid agencies to make money, others that Congo’s former government was trying to kill off opposition supporters ahead of a December election.

It is one of the reasons this outbreak has been so difficult to contain, along with bouts of militia violence that send patients fleeing to other areas. Twenty new cases were reported Thursday and again on Saturday, the highest daily tolls since the outbreak began.

In the midst of tragedy and fear, children’s reunions with parents are a rare bright spot.

Godalive Kabuo, 30, smiled as she returned to the childcare centre in Butembo to pick up her 6-month-old daughter, Hortense, a giggly baby in a yellow knit hat. Kabuo had just been discharged from the treatment centre next door after testing negative for Ebola.

“Since they are taking care of the babies 100 percent, I say thank you,” she said.

Back in Beni, Masika whispered goodbye to Furaha at the end of her shift and handed her over to another caregiver. She then left the cube to disinfect herself with a chlorine solution and change back into regular clothes.

But the day was not yet over.

Walking purposefully out of the centre, she said she was headed to a hospital. One of her own children was sick with malaria and needed her care.