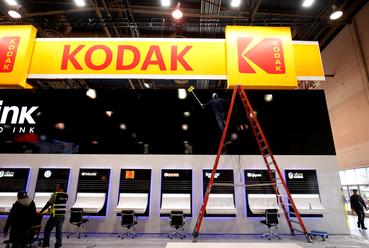 NEW YORK/LONDON (Reuters) – Eastman Kodak Co (KODK.N) on Monday granted its executive chairman options for 1.75 million shares as the result of what a person familiar with the arrangement described as an “understanding” with its board that had previously neither been listed in his employment contract nor made public.

One day later, the administration of President Donald Trump announced a $765 million financing deal with Eastman Kodak, and in the days that followed the stock soared, making those additional options now held by executive chairman Jim Continenza worth tens of millions.

The decision to grant Continenza options was never formalized or made into a binding agreement, which is why it was not disclosed previously, according to the person familiar with the arrangement. The options were granted to shield Continenza’s overall stake in the company from being diluted by a $100 million convertible bond deal clinched in May 2019 to help Eastman Kodak stay afloat, according to the person’s account.

While Kodak’s approach is permissible, it is unusual because executives are paid to grow a company’s long-term value and are not usually given extra compensation personally to cover events that may hurt share prices, several experts said.

Kodak disclosed the stock options award to Continenza in a filing to the U.S. Securities and Exchange Commission, which was previously reported. But the person familiar with the arrangement told Reuters that the transaction occurred because of the understanding with the board.

That arrangement reported by Reuters for the first time sheds new light on Eastman Kodak’s handling of the unexpected windfall for its top executives.

An Eastman Kodak spokeswoman said that Continenza had no comment. The spokeswoman said the gains reflected by the rise in the share price are only on paper: Continenza, she said, “is a strong believer in the future of the company, and has never sold a single share of stock.”

Prior to this week’s financing deal, the company warned investors it was at risk of not continuing as a going concern, but it was boosted by the agreement with the Trump administration on Tuesday to supply drug ingredients.

As a result, Continenza’s gains at the end of this week amounted to about $83 million following a roughly 10-fold increase in Eastman Kodak’s stock, compared to the approximately $53 million in gains he would have seen were it not for the additional options, according to a Reuters analysis of company filings.

Roughly 29% of the options Continenza received on Monday vested immediately, giving him the right to cash them out as soon as possible.